Straddling two continents, wordsmith, Vikram Chandra is deeply inspired by Indian mythology and epics. In Mumbai for the release of his latest offering, Sacred Games, the award-winning US-based author speaks about modernity and ‘Indianness’ in a tête-à-tête with SITANSHI TALATI-PARIKH 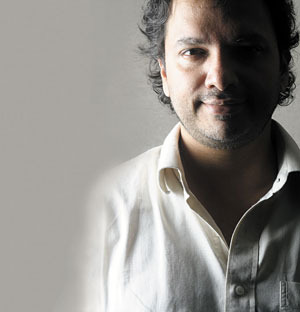 Muted conversations, tinkling of wine glasses, dusk setting in saw the world-wide book launch of eminent writer, Vikram Chandra’s much awaited third literary offering, Sacred Games, in Mumbai at the Hilton Towers’ Rooftop. Early the next day, at the suburban Taj Lands End, Mumbai, a conversation enfolded with the award-winning novelist who surfaces in the world of words (earlier works are Red Earth and Pouring Rain and Love and Longing in Bombay) after a long sabbatical. I had to ask – why so many years before another novel – seven in the making. He replies with alacrity, “I’m just slow, very slow. It does take some perseverance and a large degree of obsession!” This trait is remarkable in the little man with precise and fluent thoughts and a great deal of patience. As the dialogue swirls around lengths and time, Chandra states that writers have their own best lengths. “I did short stories as an experiment,” he says, “to see if they would work, but even those got really long! For me, long length is natural.”

It becomes very clear that the California-based Chandra is, as one can tell from his writing, deeply inspired by Indian mythology, the epics and other magical tales. “What forms us when we are young and growing up, stays with us,” is his strong belief.

Born and brought up in India, but having left for the States out of sheer frustration at not being able to find a good course in creative writing (when he followed poet, Nissim Ezekiel, around), Chandra did his undergraduate degree magna cum laude in English. He looks back and wonders: “Before going abroad, you live in your own parochial world and somehow think that you are universal; that you are like the person on the other side of the world. Once there, within the first couple of days, you realise that you are talking in different languages, even though everyone is supposedly speaking English!

Since then, he has been studying, working and living in America, with frequent visits to the city close to his heart, Mumbai. As a professor of creative writing at the University of California, Berkeley, he finds the cross-cultural mingling stimulating and educational for both sides. He marvels at the rapid changes in India too, “The modern urban Indian is a very different creature from the modern urban New Yorker. In a world that’s rapidly globalising and seemingly getting smaller, we are also fragmenting more and more and the polarities are growing more intense.”

What is his concept of ‘Indian’, then? What we think of as ‘Indian’ is actually the result of many, many changes all through the ages, Chandra explains. He points out that to talk of an unchanging Indianness and the nostalgia for an unchanging past and subsequent stability is itself a falsehood. Brooding about the changing nature of society, Chandra insists that “the world cannot become uniform, even if it is a smaller place”. He predicts an increase of the parochial and the local or an urban niche. “The seemingly contradictory thing,” he says, “is that even as we become more modern, we become more tribal.”

Chandra often and wistfully recalls the days when he and his friend, Anuradha Tandon started the adda in Goa Portuguesa, a restaurant in Mumbai, as a meeting ground for young thinkers and artists. He notes with some amusement that while the Mumbaiites would be dedicatedly taking part in discussions that went on into the wee hours of the morning, their American counterparts in DC, would rush off home by 9 p.m., since the next day was a working day. With barely concealed enthusiasm, he states, “It really was amazing and a lot of fun! That kind of cross-pollination and conversation is really helpful for all kinds of people – really good things came out of that.”

With the turmoil prevalent in the world around, Chandra believes that in some ways it’s a really good time to be a writer because there is so much turbulence and change. The material that is offered to you, that you come by – although it is often painful – is really rich. “In some sense, every book that I have written is a response to what is going on around me,” he says.

Coming from a family that is prolific in the arts, it is no surprise that he is also greatly influenced by the people around him. While his mother, Kamna Chandra, a playwright for All India Radio at the time, was concerned about how all her children would make a living by choosing a vocation in the arts, the entire family came together as a great support system for each other. The atmosphere in the house was always filled with literary discussions and varied artistic interests – what with sisters, Tanuja Chandra (film director) and Anupama Chopra (journalist-writer), to add to the talent pool.

One would imagine that with so many writers in one household, there would often be a difference of opinion. Chandra, on the other hand, looks unfazed and finds it productive. “It’s all in good faith. It doesn’t get to the point where you start resenting somebody else’s opinion. It’s great to be around people who understand the life of being somebody like that. You are, in a sense, strange and different.” Talking about his wife, Melanie Abrams, who is also a writer, Chandra recalls meeting her at an art festival in Los Angeles and staying in touch via email. He says, “We sometimes completely baffle each other. The universe we see is different from that of the other person.”

Chandra, himself, is a man of many talents. His proficiency with computers was discovered when he was working his way through film school in New York. A self-proclaimed computer geek, he loves to dabble in a bit of programming to relax!

After his ambiguous experience of being one of the writers for Vidhu Vinod Chopra’s Mission Kashmir, Chandra is pretty emphatic about not returning to script-writing anytime soon. “As a novelist, you have such complete control over what you do but film-making, from the ground up, is a collaborative art. It’s thrilling at times, because you pass around ideas and then directors step in and the actors make something of what you did. At other times, you want to do something and you can’t! So, then you feel really angry and frustrated.”

Funnily enough, Chandra recalls with a sheepish look, “I actually went to film school because I was scared of being a writer!” After his BA, he was lost and didn’t know how to earn his livelihood. For a year he drifted around taking up odd jobs from that of a night baker to a security guard and furniture mover in Los Angeles. Then he decided to go to film school, figuring that at least that way he would have a chance at a creative job. Ironically, it was film school that led him right back to writing books!

As the discussion revolves around the topics he chooses for his books, Chandra matter-of-factly states, “One writes something close to what one reads and gives pleasure. The Victorians, for instance. I love the diffusion of characters…!” He believes that Indians would necessarily write about the Indian experience, since that is where they are coming from. However, he warns, “One does have to be careful about getting stuck in an ethnic ghetto…for instance, the temptation to write yet another story about cultural confusion.”

For the choice of the detective genre for his latest book, Chandra believes it is a neglected and curiously pleasing form, which weaves across cultures. The detective incarnates the scientific method and the form fits with logic and reason against the chaotic. “In the end,” he says with a smile, “you love it because it comforts us and restores order.”

Has the million dollar-signing contract restored any order for Chandra? Quick to allay the thought that he is discontent, he states a little ruefully, “People presume that with that kind of number, you are set for life. After paying taxes, what you are left with isn’t enough to even buy a house! At the end of it, you are still faced with the task of making a living and feeding your dog. It’s not as if you are transported into some kind of heaven!”

A kind of heaven for Chandra, it appears, is his time distributed between his two homes. He does miss Mumbai and writes about it through the characters in his new book as well. “That is also not to say that the city is not trying and exhausting and wears on you like nothing,” he chuckles. He finds the travel and distance to be a much-needed perspective. “Getting away is a sort of purposeful dislocation – and each time I return, I can feel the city experientially again, renewed.”

While stating that there is so much territory left to explore, Chandra does show a semblance of weariness as he states that he has no plans for another book as yet. A holiday is on the official charts for him – a much required and enforced one.

Quietly contemplative, he concludes, “I realise now how lucky it is to be able to do work in the world that you actually enjoy. It’s not a privilege that everyone gets.”