He seamlessly translates his obsession with history into words. At the launch of his latest tome – The Last Moghul – in Mumbai, William Dalrymple zooms in on the contemporary literary diaspora and its impact on the West. Sitanshi Talati-Parikh gets upfront and personal with the veteran novelist 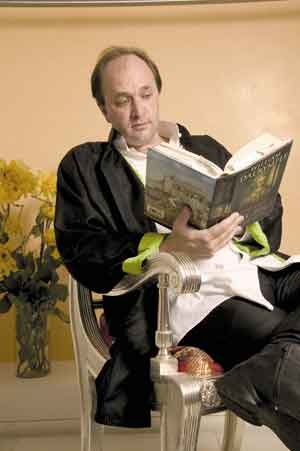 I read through some parts of a 500-page historic tome and then stop to wonder what the writer, William Dalrymple, himself would be like. A hearty, jovial Scotsman was definitely not in the reckoning, but there he was, merrily sipping wine and chuckling away at every opportune moment.

“‘Why India and why Delhi’, is a question that always intrigues me,” muses William Dalrymple. “It implies that India and Delhi are not places where one would naturally prefer to live. One doesn’t think that way about New York or London. It implies as if India is second best!” He laughs heartily at the fact that English journalists never ask him this question. But scribes from Delhi and Mumbai often have this query and seek answers from him.

The Last Moghul, on the sepoy mutiny during the British Raj, was drawn from a collection of 20,000 Urdu and Persian documents stored in the National Archives in Delhi. Dalrymple collaborated with two other scholars who helped him unravel the material written in these languages and scripts. “The physical writing is mine, but the actual work, thoughts and ideas that we thrashed out over many cups of National Archives’ chai and Kareem’s kebabs was equally Mahmood’s [Farooqui] as it was mine,” he states unequivocally.

As we discuss the nature of religion affecting the uprising, Dalrymple suggests that every historian writes history imprisoned in his own time. Like he himself discovered that, in the aftermath of 9/11 and Ayodhya where one sees religious matters animating people to resistance and violence, the Delhi documents were overwhelmingly one of religious causes. To his surprise, he also found a latent jihadi element: the Delhi uprising didn’t talk about the angrez, as much as it discussed the Christians and the kafirs (infidels).

Though Dalrymple disagrees that this book serves to talk about the present or the future, he does believe that history repeats itself. There are clear lessons, and while sitting in the library researching this, the story had been played out every day in the newspapers. “At the basic level,” he says, “if in the West, you mess around with the East, invade it, the chickens will come home to roost!” He is bemused by the Americans’ surprise: it is not shocking if one country takes over people of another nation, impinges on the freedom of people, dominates their economies and their lives, it is bound to have repercussions. “So,” he emphasises, “you find a completely erroneous depiction of history of unbridgeable divides of civilisation, of eternal clashes between a free, democratic, liberal, Judeo-Christian West and the imperial, aggressive, irrational East.”

It took a Scotsman passionate about Indian history to notice the wealth of information lost to people in the dusty archives. Dalrymple is shocked that 75 per cent of material that they uncovered from the department had never been requisitioned before. He exclaims, “This is the National Archives in the Indian capital, with documents on practically the biggest event in 19th century history where the anti-colonial vote was the largest in this city than anywhere in the world, and there was no interest in exploring it. That to me is utterly, utterly extraordinary!”

Dalrymple believes that one of the reasons that a major piece of world history was more-or-less his to unfold and write about, was the lack of familiarity with Urdu or Persian by scholars and historians of today. “It is a great privilege to be in this position. But it is not as it should be. It shouldn’t be a white Englishman unravelling a major piece of Indian history.”

The writer who has lived in Delhi for 20 years, and claims modestly to know Hindi “thodi, thodi,” suddenly jumps up excitedly and asks me about Kiran Desai. Reading aloud from The Inheritance of Loss, he speaks with pleasure of the desis in New York, the taxi and delivery boys. On a serious note, he says, “The diaspora are mediating India for the West.” Kiran Desai, according to him, is a New Yorker. The last book, written by an Indian, in India, which really made it in the West, was The God of Small Things. He believes that one does not need to be validated by the recognition of the West to be an artist. Accepting that writing in a regional language may be superior to one of these Indian novels in English, he feels that Indians are no longer producing artistic work that creates an impact on the West. Thereafter follows the discussion over whether one should privilege ethnicity over experience: Shantaram is considered to be a far more realistic portrait of Mumbai than Suketu Mehta’s Maximum City.

The historian, whose first travel out of Scotland was to the subcontinent, is optimistic, but believes that the jury’s out on India. Whilst there are “extraordinary cities rising out of the deserts,” there are still some major unresolved issues like the “criminality of politics, caste issues and cranky infrastructure.” Dalrymple is surprised that Pakistan has much better infrastructure than India. He describes the big difference between the two countries is that every year India’s literacy rate creeps up: this is the factor that will determine the subcontinent’s future prosperity and Pakistan’s uncertainty.

The controversial writer is proud of how easily his family has adjusted to India. His wife, Olivia, an artist, speaks better Hindi than he does, and his three children go to school in Delhi, hang out at the Red Fort, watch Dhoom:2, spend Christmas at the Tiracol Fort in Goa, weekends in Jaipur and summers in the UK. “I like walking. The frustration about living in a place like Delhi is that for most part of the year, the climate over here is not conducive for walking. There are moments in May when I am at a loss, wondering why I live in this country!” he laughs. Dalrymple considers Delhi home and Mumbai a place where he comes for fun, with a meal at Trishna, walk on the beach in Juhu and friends to visit.

Exhausted after producing “two big fatties” in five years, William Dalrymple looks forward to taking a year off, doing bits of journalism and attending literary festivals in beach resorts. He eloquently anticipates a reading at the moonlit Diwan-e-Khas in January. Already next on the list are a collection of Indo-centric religious journals, with sections on countries like Pakistan and Palestine; and a book on Akbar soon to follow. Quietly pleased with the appreciation of his work, this Scotsman, who has discovered a passion for the history of the Indian subcontinent, is determined to uncover more stones left unturned.