A doctor, columnist, novelist and detective fiction writer, Kalpana Swaminathan is often taken aback by the absurd situations that she has been witness to in her multi-hued career. She encapsulates the banality of everyday living in her works as is evidenced by her latest offering, The Gardener’s Song. Sitanshi Talati-Parikh exchanges notes with the diverse wordsmith who delights in dabbling in different genres 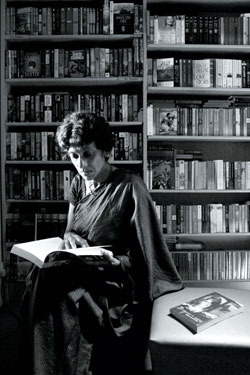 Holding a tête-à-tête with the talented, genteel lady, simply clad in a green sari, I sit at a corner table at Crossword, Bandra. Kalpana Swaminathan juggles at being a doctor, columnist, novelist and detective fiction writer, so our conversation sparks off with her unusual career choices. She brushes off any surprise at a paediatric surgeon taking to writing, with a decisive, “You have to be interested in people.”

Sensing that nothing more is forthcoming, I switch gears to what made her start writing. Looking less than pleased, she counters, “What kind of answers do you expect? I wish I could produce something magical.” As a child shouts behind us, Swaminathan visibly softens and warms to the topic. “I love children and I love to write.” She muses, “Medicine as a profession becomes a way of life. You use perhaps ten per cent of what you learn in practice. The other 90 per cent is not used for ‘doctoring’ – it serves a larger purpose, it changes the way you look at things, it changes the value of life.”

Just like one must have a sense for the written word, Swaminathan believes that one has to learn the child’s language and understand it. She defies the myth that children can’t talk or communicate. “It is actually the adult who has to learn how to communicate and learn to understand what the child is not telling you.” It is not surprising then, that she found her stories for children easy to write – they are all fairy tales, with magical things happening in the world.

Swaminathan found herself publishing short stories at the fantastically early age of 13, but soon after went through a lean period where for years she did not get the chance to write, until after the age of 30. She recalls those years as being “rich, harrowing and exciting,” all in one breath, a time when she was studying medicine and working intensely. “When I started writing again, the initial writing was easy – it simply scaled off me. After that, I began experimenting with different genres.”

Around 1996, after her foray into children’s writing, Swami–nathan began writing columns with her colleague and partner, Ishrat Syed. As I wonder if it is easy to write in tandem with another person, she brushes it off as child’s play, simply, “We had to arrive at a distinctive style.” It was an exploratory journey, from Animal Crackers for a daily newspaper, to columns, where they wrote about different things including art, food, “mad” science, literature and lingua franca. She recalls with pride, that in 2000, when the human genome was being mapped out, they tracked its progress, in a week-by-week review column. As if reading my thoughts, about why they haven’t written a piece of science fiction yet, she mentions that their jointly written book is due to be out soon, which is to be a futuristic view of Mumbai.

When the experimental writer wanted to have some fun, she began writing detective stories. Her detective Lalli is accompanied by her niece, the writer of the book. Lalli isn’t the action-oriented detective of the racy thrillers, but the analytical thinker of Agatha Christie’s genre. Noticing the Poirot-Hastings ensemble cast of her novel, I ask the inevitable question. Swaminathan is quick to reply, “Of course, I’ve read Agatha Christie – who hasn’t? She’s a marvellous writer, as all the others out there, but I like to think of my work as my work!” Her first detective fiction, The Page 3 Murders, is a spoof on a country house murder, relocated in Mumbai, where, as she puts it, “everyone lives in each other’s pockets.” In here we find the classic English whodunit.

Tired of men and their sidekicks, Swaminathan deliberately chose an elderly woman as her detective. After all, she points out, an Indian woman would be free to do as she pleased only when post-60 and problem free! Sharp, compassionate and efficient, Lalli, a retired police officer, is considered the man in khaki’s Last Resort (LR) on troublesome murder cases.

The Gardener’s Song, Swaminathan’s latest whodunit on the murder of the nosey Mr. Rao in a Mumbai suburb, is ultimately a Mumbai book, traversing Juhu by-lanes all the way to the dilapidated buildings of Princess Street, opening up the lives and eccentricities of suburban Mumbai households and communities. Her writing is experiential: “I used to know Bombay – not what is has become in the last two or three years, but its largeness, its middle-class suburban experience.”

The banality of everyday life comes under the writer’s microscope – taken aback by the absurd situations that she has often been witness to, it is but natural for her to include these elements in her story. In The Gardener’s Song, for instance, Swaminathan describes an incident where a man is in desperate need of a blood transfusion and the only person who matches his blood type appears on the scene, only to be nearly frightened away at the thought of an HIV test. Aghast by the impact of what a rumour like that could have on his social life and marriage prospects, the donor is vouched for by his employer and colleagues as “a good man, from good family” – as if to imply, that that in itself should be sufficient proof that the man is not HIV positive!

The Gardener’s Song is not lacking in social comment, as if attempting social change in the midst and through the medium of a detective story. This touches a sensitive area, as the impassioned writer exclaims, “I do feel very strongly about these things and cannot help voicing them!” She is angered that the Indian Penal Code has a separate section for dowry death, which is basically “soft-optioning it, not calling it murder.” Swaminathan finds that Indian crimes are crimes of despair, hypocrisy, refusal to face the truth: “We can’t say bad things about people, but we can murder them. We are a cruel, violent and dishonest lot, and those who disagree, do so as they are cushioned by illusion.”

Swaminathan takes a cynical view of women in Indian society, the kind of women who sustain an obsolete patriarchy, and the feminists who are tired of being feminists. She firmly believes that every man and woman should do his or her bit. Believing that the most powerful women in Indian culture are elderly women, she holds them responsible for the crimes committed against other women. In fact, this is one of the reasons that she profiled her detective as an elderly woman.

It is clear that this is a writer who understands her audience and her subject, in equal part. Swaminathan brings out nuances of the local language in her writing, nuances that are completely absent from her crisp spoken English. As we have a dialogue about Salman Rushdie’s theory of “chutneyfication” of the English language, she describes how the language conveys the essence of the person, the local idiom and the flavour of the conversation. A large number of writers attempt to bring their part of India in their writing, as the local dialogue is a bridge between writing in the local tongue and writing in English. It is in this manner, that the language comes alive and it is easy to move between time and place, to enter and explore a region and lives in a way that one can’t imagine. In fact, a lot of the conversations in her books are taken verbatim from real life.

Swaminathan isn’t disconcerted about the dearth of detective fiction in the country. Publishing in English, in India, she explains, is only 20 years old; she expects to see a great deal more in the next five years.

Taking a few moments for this thought to sink in, the middle-aged writer, who finds the time to write on a daily basis, whilst actively practising, notes that writing per se has less to do with the craft and more to do with the experience of being a writer. And what is it that she, as a writer looks for in her work? Sitting back, taking a sip of chilled water, Swaminathan smiles and says, “Every writer is looking for two things – the inspiration to write at least one line of truth, and the aspiration to write a book!”