Sanjay Leela Bhansali’s Padmavati has brought operas in the Indian context into the forefront of every coffee-table discussion. Sitanshi Talati-Parikh examines the relevance of operas and their place in society, and discovers that India has a long-standing operatic tradition 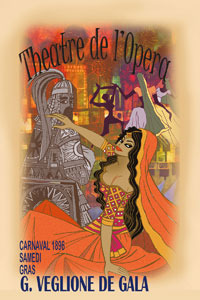 Opera is music drama,’ said Richard Wagner, the famous German composer, conductor, music theorist and essayist. Suddenly, the world of sung-drama or musicals falls wide open into the purview of what is commonly considered ‘opera’. Musicals are not to be confused with operas – the former are closer to plays interspersed with singing, and the latter a dramatic art form wherein singers and musicians combine text with a musical score.

India has a distinctive sung-drama tradition, from the sentimental lyrical tales, Sufi poetry and the Ramlila of the north, to Chakyar Koothu and Ottamthullal of the south, even if the classical operas in the European style are a far cry from our own operatic form. In India, Dip Chand introduced the importance of voice-culture and voice-modulation and an emphasis on emotion in music, incorporating music, dance, verse, ballad recital and pantomime. From plays drawn from legends to current themes like women empowerment and AIDS awareness, this form of theatre serves a social purpose as well.

Luciano Berio, experimental Italian composer, spoke about the birth of the opera in the 16th century: ‘Opera once was an important social instrument, especially in Italy. With Rossini and Verdi, people were listening to opera together and having the same catharsis with the same story, the same moral dilemmas. They were holding hands in the darkness. That has gone. Now perhaps they are holding hands watching television.’

It leads one to question whether television has made performances into a commodity and if live acts have lost their artistic place in society. When at one time, in lieu of TV, people would gather together in a community to watch live performances; now it is a delicacy left for the elite or the tamasha of the poor.

‘Opera is an 18th and 19th century art that must find a 20th century audience.’ The late Goeran Gentele, Swedish empressario and director of the Metropolitan Opera in New York, pondered on the challenges of modern opera. The same question applies to us. Will this century witness a resurgence of this art form in the cosmopolitan theatres of India, or will it be marginalised as local tradition, simply splurged upon when visiting the Continent?

Omung Kumar and Rajesh Pratap Singh, who have worked on Sanjay Leela Bhansali’s flamboyant production, Padmavati, on the sets and costumes res–pectively, both agree that to bring larger-than-life performance in the shape of a grand opera to India is a challenge and not necessarily commercially viable. With exorbitant sums required in funding, they wonder if anyone would touch an opera. Also, it serves to satisfy the aesthetic palette of only a minute slice of the theatre-going audience. It is not surprising, seeing that Padmavati, at the Theatre du Chatelet, had an excellent infrastructure – a pit in the stage that went down 25 feet – the budget and ability to throw in a few live animals (elephant, horse and tiger, no less) and a flying Ganesha, to top it all.

Indian films that follow the song-and-dance routine come closer to musicals than operas, but serve to remind us that given a chance, our audience may not balk from a truly operatic experience. Recently, Puccini’s opera Madama Butterfly was recreated by the National Centre of the Performing Arts (NCPA) in Mumbai where The Symphony Orchestra of India worked in tandem with an international troupe. This sparing visit left the theatre-going audience craving for more. As Padmavati moves to Italy and may plan to visit India at some point of time, it leads us to hope that sophisticated operas on an international scale may find a place in our weekends. Sitting through an opera is like taking a bite of caviar and relishing it. With elitist appeal and an expensive price tag, can this art form become a trend in India or remain a luxurious delicacy?

India Abroad
Padmavati – Albert Roussel, sailor and composer, after a trip to South Asia in 1909, wrote this opera, which was well received in Paris in 1923. It was recorded twice after – in 1969 by Jean Martinon and in 1982 by Michel Plasson. The latest version is by Sanjay Leela Bhansali, in 2008.

Les Indes Galantes – The Orient has served to fascinate French composers since the 18th century, the greatest period for the opera-ballet. Jean-Philippe Rameau’s Les Indes Galantes is an example, depicting the love life of ‘noble savages’.

The Sorcerer – This 2006 Gilbert and Sullivan light opera was advertised with the tagline ‘Opera Meets Bollywood’ and performed in Stanford University’s Dinkelspiel Auditorium. The story is set in Victorian India, where the protagonist, Alexis Iyangar, follows love to countermand worldly unhappiness. Bright silks and Bollywood choreography are set to Gilbert and Sullivan’s original score.

The Fakir of Benares – The opening show in April 1922 at the Mandador Theatre in Paris, became the talk of Europe. Priya Wacziarg, soprano and daughter of French author and historian Francis Wacziarg resurrected this opera nearly 80 years later, under the direction of Muzaffar Ali. The opera incorporates Bharat Natyam and Kalairipattu, along with Indian musical instruments. This was the first time an opera was screened in India with the help of Indian and French artistes, before taking it abroad.

Raj Kapoor’s first introduction to opera was Fiddler on the Roof, performed by Topol, famous Israeli theatrical and film producer. At this time, Topol was said to have announced to the audience: ‘Ladies and gentlemen, there is a misconception that I am Israel’s most popular actor. That’s wrong. I am the second most popular man, the first being Raj Kapoor of India, who is present here with us today.’

Comic Opera – English-language operetta, reached its peak under the hands of Gilbert and Sullivan during the Victorian era.

Rock Opera – Singers sing a story while acting it out.

Metal and Rap Opera – The latter also called hip-hopera; is a strain of Rock Operas.

International reactions to Padmavati (2008)
‘If the Theatre du Chatelet was hoping for a spectacle on a scale seldom seen these days, this work – staged only once since its Paris premiere in 1923 – offered endless potential. Bollywood director, Sanjay Leela Bhansali, making his first foray into opera, obliged with a flamboyant production attentive to authentic detail.’
Lynne Walker for The Independent

‘Some of its dark colours are undeniably attractive, and the vocal writing is elegant. But something more is needed in a 100-minute stage work, and the thinness of the action, combined with the lack of detail in any of the characters, even Padmavati, is only emphasised by the long stretches of ballet music in which nothing happens.’ Andrew Clements for The Guardian

‘The result looks like a Bollywood movie – colourful, endearingly naive, picturesque…. Don’t expect thrilling arias or dramatic climaxes. Padmavati is essentially a decorative work. You watch it like an exotic painting or a religious ceremony.’
Jorg von Uthmann for Bloomberg News

Devdas (2002) – Lawrence Foster, Opera Music Director, Padmavati, considers it ‘opera ballet;’ while David Chute, writes in the LA Weekly, ‘There were sequences in his 2002 Devdas that played like long-lost snippets of Verdi.’

Saawariya – In the same article, Saawariya (Beloved), is described as ‘a lavish road-show revamp of La Bohème.’ Shree 420, Awara, Mera Naam Joker – Raj Kapoor is known to have visualised films in operatic style, with pathos and melodrama. Shree 420, an iconic film is actually considered to be more performance than film – a ‘brilliant melodrama’ where everyone sings and everyone dances, including the homeless and the wealthy!

Homespun sung-drama
Origin – 3rd century BC with the Rigveda and the Natya Shastra of Bharata Muni, where plays were written in verse form, commonly under royal patronisation.

Punjab – Heer Ranjha is performed as an opera-ballet and Mirza Sahiba is sung in long pensive notes.