With an impressive dossier of news stories that include live coverage of the Kashmir elections, Iraq conflict, Afghan War, the tsunami tragedy, Nepal’s royal coup, and an Emmy nomination for his recent film, Who Cares About The Girls, documentary filmmaker, Rohit Gandhi, speaks to Sitanshi Talati-Parikh about women in India and the role of journalism 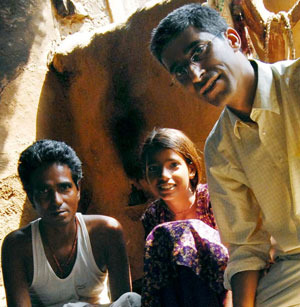 In the making of the documentary Who Cares About The Girls, which has been nominated for an Emmy award in the Outstanding Investigative Journalism – long form category, Rohit Gandhi, who is particularly interested in children – seeing that they are our future – describes how after weeks of research, a 14-year-old girl, Radha (name changed), was chosen by the NGO to be the one rescued from her abusive father and sister. He recalls with regret and anger that while the rescue took place as planned, the girl was produced in court and was released as the cops did not explain the circumstances under which the girl was rescued and, despite their best intentions, they could not help her.

The story revolves around four characters: two sisters who were sent away from home to work as child labourers, who were both sexually and verbally abused; a former sex worker-turned-activist and a rescued girl. Though it describes how children continue to be abused, Gandhi believes that there is a positive future ahead if we all get together and fight the problem. After all, “There is no magic wand to change the reality today.”

Gandhi takes his work in his stride – not wishing to become the face of any story, rather letting the story speak for itself. “It is providence to be in a position to be able to make a difference. Journalism is an opportunity to be a mirror of society, help reflect on what we are doing in our daily lives. It compresses space and time and gives a picture of our present reality.” In much the manner that his moving story on a young Iraqi boy who was severely injured by a bullet in the midst of the US-Iraq gun fire, came to the attention of the ambassador of Greece, who took the boy to Athens for treatment and brought his life back to normalcy.

The sociologist says that he knew where he was headed very early in life and that the things that need to be changed are not sitting hidden in sub-Saharan Africa, but right under our noses. “Evils of society happen right around us,” he states, moving on to describe one of his first stories – from the Tihar jail. He believes that putting criminals away in our jails makes them even more hardened criminals – and his story tried to bring about a positive change, in this “very evil system.”

The journalist who has worked with numerous national and international TV channels, and has been the recipient of many awards including an Emmy for his war coverage in Afghanistan in 2001, believes that Indian society respects its women a lot but at the same time treats them very badly. “Traditionally, we were not like this – we have lost our roots. We need to change that. Education, not just literacy, is the mantra.”