Two rocking women have something new to offer. Sona Mahapatra is singing a different tune and Anushka Manchanda is jamming with a new band when she’s not trying daredevil stunts in Fear Factor – Khatron Ke Khiladi. Sitanshi Talati-Parikh turns up the volume 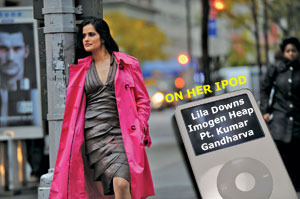 Tell us about your latest song, Diljale and album, Raat/Din. What’s exciting about it?
Diljale is a rock power ballad that celebrates the pain of loneliness, the beautiful void. The album, Raat/Din is really exciting because we believe it’s India’s first soundtrack rock album. The music is heavily influenced by the films of David Lynch and Wim Wenders. And the launching is unique: a totally digital launch worldwide, starting with Diljale, followed by subsequent songs with finally the whole album releasing by the end of the year.

Indie vs. film, what’s your take?
They’re two completely different genres today. In film music, you’re mostly interpreting other people’s ideas, while with independent music you’re expressing your own. There was a time when film songs were about ideas and expression and taking a narrative forward, but sadly today there are promotional tools and have drifted further away from meaning, the notable exception being Gulzar saab. I prefer being on stage above all else!

Do you rock just as much behind the scenes?
I quit being a VJ on TV to focus on my music and my career as a playback singer, and haven’t regretted the decision. As a performer, I get to travel the country and the world, and being on stage, I have never missed the limelight. I’m the same person on and off camera, and am comfortable both ways.

Tell us what’s exciting about your ‘electro rock n pop’ band, Shkabang?
Shkabang is here to play some good music and to have a blast doing it. We’re pretty elastic as a genre, but love bouncy grooves and bass lines. The boys are all hotties, and I’m trying to get at least one of them to play topless.

What was the most challenging part of Khatron Ke Khiladi?
I’m not a very good swimmer and I’m petrified of being underwater. I almost drowned in a pool as a child, and even though I absolutely love being in the water, I panic when it’s deep. So all the stunts involving water would have me freaking out!

Do you write your own songs?
Yes! There was a time when I only wrote about heartache and stupid boys. Now, I see things around me that make me stop and think, and I write about them.