The reclusive writer Vikram Seth goes From Heaven Lake down memory lane. While at the University of Nanjing, young Seth, armed with a rare travel card, began a hitchhiking trip through the remote parts of China all the way to Lhasa, traversing difficult climatic zones and eating glutinous broth with pork fat floating in it. Sitanshi Talati-Parikh finds the writer fondly nostalgic 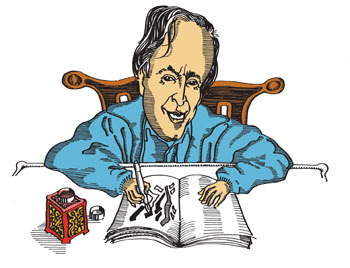 He is as charming as he is reticent. He faces audiences like a pro; wooing them and making them chuckle with his tongue-in-cheek humour. I watch as he quietly walks to the people he knows, greeting them in perfect English and Hindi. He mingles with the cocktail crowd, and it is hard to remember that he is indeed reclusive. As little children put up a performance in his honour, he pays them full attention, and is willing to cut his talk short to ensure that they have sufficient time. Over cocktails at Amandari, the audience reaches out to him, asking him about his irrepressible journey, referenced in his travelogue From Heaven Lake – Travels Through Sinkiang and Tibet (1983).

Extracts from the conversation with Vikram Seth:

You were in China when it was a “different era”. Did you have a sense of the scale of difficulty?
No! If I had, I would have never done it. ‘Rules are rules’ – I can’t tell you how many times I heard that in China. The only way to counter a rule was to invent an opposing rule.

You had some interesting experiences with the Chinese language.
When I first went to China, I could hardly speak Chinese, despite having studied it. So when my friends asked me how I came to China, I used the wrong intonation of speech. When I meant to say aeroplane, it actually sounded like ‘fat chicken’.

You went to the local truck station instead of taking a train or plane. Why that particular choice of transportation?
I didn’t have very much money. I was in this desolate desert town called Willow Garden – the last willow must have disappeared several hundred years ago. After two days it was like descending into a vortex of despair. I ingratiated myself with a person leaving soon in an army truck that was loaded up to the brim with live chickens and fruit, with very inefficient heating. Not very far there were huge floods across the desert where we were stuck for days on end. The one thing you don’t expect in the desert is a lot of water, but it’s always there when you don’t need it!

What drew you to Tibet?
Tibet is a mixture of two great culture zones. It was a mysterious land and with my brother gearing towards Buddhism, I felt a strong inclination to go there. The feeling lingers to date. So strongly was it fixed as an aspiration, that even when it was fulfilled, it didn’t seem plausible.

People you met along the way had been trained to be very suspicious of foreigners. What kind of response did you get?
Quite rightly, if your family’s well-being is at stake, or you might be put down as consorting with foreigners, then it is absurd to put yourself in that kind of risk. Some people were keen to use you as a punchbag for language practice, others wanted to get to know you. Eventually you realised what good friends the Chinese make – reticent, and with a subtle and slapstick sense of humour.

Why did you decide to turn your experiences into a book from journals and photos?
I arrived home and was initially mistaken for a street peddler. I was burnt black by the sun, was wearing a blue Chinese cotton coat and carrying a Hessian sack with all my belongings. Eventually, I got really impatient and bored narrating my stories, so I decided to write a few pages. And then strange people appeared at my door, apparently from the foreign ministry armed with maps of China. My father suggested writing a book about it. And that’s what I did. I had no agent – I just sent out ten letters and a map!

Tell us about Heaven Lake.
It is a beautiful snow-fed mountain lake in a small range of mountains in the middle of the desert. You’re baking in the heat, have to buy a cap for yourself, and as you go higher and higher, you visit Heaven Lake – and actually freeze.

The foreword to the book was written “in white heat” three days after the Tiananmen Square massacre.
In some sense, I am not really qualified to speak about the state of affairs. I have followed it with interest, but I haven’t been back. No one has ever said that the dreadful massacre was wrong. Even now, at a time when the government has created such a prosperous economy, there’s such a strong journalistic hand – and a brutal hand – upon people who want to exercise free speech. Any alternative power centre or centre of allegiance has been crushed with an iron hand. I don’t know where it will lead! Chinese history is perhaps more brutal, and there is a more humanist tradition that goes through it, than in any other country. Even at times when people are in despair, like during the Cultural Revolution, when they had to betray their families, they took refuge in their great poets. They see long continuity, and it helps them get through terrible times.

Do you imagine having the freedom to say ‘I will stay a few extra days’ or to have an adventure like that again?
I am trying to enter a second childhood, by refusing to do anything. I rarely accept invitations and keep, as far as possible, a blank calendar. And it is not just so much a question of saying ‘I’ll stay here’, but it’s almost as much a question of ‘I am doing Chinese calligraphy, or painting,’ without having the obligation to go somewhere, or be somewhere. My friends now invite me on very short notice – if I’m not on the 13th line of a sonnet, then I’ll say, ‘sure’ – if they invite me with six weeks notice for a sit-down dinner, the answer is: ‘Don’t depend upon me.’

It has been two decades since you have revisited China….
It was 1982 when I left China after staying there for two years. In 1989 I went back, seeing that China, like the whole communist world, was opening up. Three days after returning from my visit, I read the newspaper and the headlines – the massacre of thousands of people on the square. Of people who wanted nothing more than a more open system. Sooner or later I will want to go back to China – it is very close to me and to my heart, in terms of the culture. Places change. India has changed a lot.