It evolved from a Caucasian play to Parsi characterisation – making it appealingly familiar in the Indian context. Sitanshi Talati-Parikh goes behind the scenes, previewing The Game, an endearing two-person tragicomedy 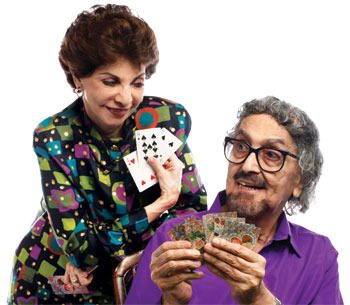 Alyque Padamsee, Sabira Merchant, Bachi Karkaria, Raell Padamsee, Sam Kerawala. Stalwarts all, come together in The Game – Bachi’s adaptation of DL Colburn’s The Gin Game and her own earlier adaptation The Rummy Game – which brings Shireen Bamboat and Fali Pastakia, two elderly inhabitants of Pallonjee Nursing Home, together for the odd game of rummy, cracking through the carefully-maintained facades of each other’s lives.

There is humour tinged with despondency, pulling you irrevocably into their lives with a sincerity that can stem merely from a convincing performance. Alyque gets reluctantly back into acting after a hiatus of 15 years, last seen in a major role playing Mohammad Ali Jinnah in Gandhi, and accepts that while “film acting is a bore, stage gives me a huge high”. When daughter Raell chose to revive The Rummy Game in the memory of the late Hosi Vasunia, he accepted the chance to play Fali, an irascible, lonely man who masks his soft nature under a cloak of crabbiness. Sabira, who along with Hosi was a part of the earlier adaptation, is a natural as the prim and petulant Shireen. Watching the preview in Alyque’s charming living room, against the backdrop of a library of books, I find their interactions unaffected and instinctive despite being in early rehearsal mode, both adept at getting into the skin of their characters.

Sabira fell in love with the award-winning DL Colburn original theatrical almost a decade ago on Broadway. “It’s so hard to find a role for an older person. There’s nothing meaty and hands-on. This is a play you can play forever. You can age with it.” That is exactly what the play’s theme is about, a very simple conversation about aging: how children grow further from their parents and how the latter deals with that change. Fali is the prime example of transferred aggression – the physical pain of growing old and the emotional angst of being alone gets transferred into his testy temperament. In between scene breaks, over bhajjias and tea, Alyque, admits that it was an easily identifiable role, “I can feel the pain in my back, I notice myself getting more short-tempered as I go along. Patience is not about the other person, it is about you. As soon as you are physically disabled, the first thing you have to overcome is impatience.” He pauses, and with an indulgent smile continues, “And for the other point, Raell, for instance, is a busy girl – I need to take an appointment to meet her.”

Sabira chimes in with feeling, “Everything that children have to do – life in general – absorbs them so much that to meet them you have to plan in advance! It’s a fact of life.” And this very issue remains her character, Shireen’s, main concern. She is a more complex character – she isn’t quite as transparent as Fali, and as the layers of her personality peel away, you realise how vulnerably human she is. And in the metaphorical interactions and altercations between Shireen and Fali, we find a hugely touching and irrevocably moving play that remains timeless and universal in its appeal.

Alyque: “Theatre acting is really stimulating – you get a chance to rehearse, which you don’t in films; and once you are on stage, you have a live audience – there is a kind of an electric current passing back and forth. In a comedy you can hear the laughter, but even in a serious play, you can feel the audience intensely.”

Sabira: “We weep on stage because we feel the power in the belly – not because of movie-style glycerine. There is no lying. The adrenalin is pumping and you’re not yourself – you are playing somebody else, you’re under somebody else’s skin. It’s a wonderful catharsis – I am never exhausted after a play. For me it’s like a holiday. And there’s no baggage.”