As her previous two books roll on the floors as films, ad and screenplay writer, Anuja Chauhan is out with a third novel, which also promises a sequel 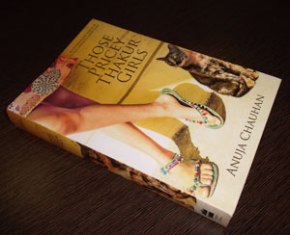 For any chick-lit fan, Anuja Chauhan is a breath of fresh air. She set the stage with The Zoya Factor, ensuring that we get her milieu of razor-sharp wit, desi mise en scene, irreverent metaphors and vivid character sketches. She took it a notch further by moving away from the city grime into rural dust with Battle for Bittora, her second novel. Those Pricey Thakur Girls arrive in small-town Delhi, with middle-class morality and the desire to be strong independent women. But here she places the story in the 80s, where at every stage you are familiarising yourself with a time that seems far removed from today. It’s the time of Doordarshan, tweaked to be Desh Darpan, a time when the Emergency is still fresh in everyone’s mind, when free speech is something to be treasured and fought for. Her protagonists are a newsreader and an investigative journalist, which makes them snooty about their respective jobs as well as their differing personalities. In the midst of revolutionary thoughts, careers and salary slips, a budding romance blossoms where Debjani Thakur, the feisty but incredibly shy newsreader falls prey to Dylan Singh Shekhawat’s charms.

Chauhan treats the light-hearted women’s fiction genre with remarkable personality. There is no rallying to western chick lit; there isn’t a desperate desiness, she has made it her own with a mix of gentility and local rootedness, which she claims is nothing but “the space we all live in! This is life in India aaj kal. I’m just writing down what I see around me, every day.” After all, Chauhan grew up in a house full of girls and has two of her own. It’s not hard to see that she leans towards the darkly determined men, who are at the heart of the matter, decent. Chauhan’s wickedly humourous romances are always marked with a foray into something new while being strangely, and comfortingly, familiar. Until the sequel, then.

Fame – either accidental or unsolicited – accompanies the stories of your protagonists.
I just enjoy a big fat public declaration of love. When it finally happens, everybody should see, everybody should know. And so Zoya (in The Zoya Factor) dates the cricket captain, Jinni (in Battle For Bittora) embraces her political rival and makes the front pages and Debjani does… um, what she does. Maybe that’s very cheesy of me – but I think a little cheese is required in our daily diet. I like putting my protagonists in peculiar predicaments and seeing which way they’ll jump.

Why is the book set in the 80s?
Nostalgia I think. I found I was spending a lot of time telling my kids (11, 14 and 17) how life was ‘back then’ when I was growing up. No Pepsi, no pizza delivery, only DD on TV. Besides, something about this book, about five sisters growing up in a big old house with a walled garden, just felt right in the 80s. Also, maybe this was just a reaction to the kind of snappy, sassy, glossy books that are flooding the bookstores, full of ‘bold’ girls and ‘jerk’ guys, I felt like I wanted to write old-fashioned romance – no texts, only letters, no sex, only kisses.