Chanel No. 5’s new campaign directed by Baz Luhrmann features Gisele Bündchen and has a haunting soundtrack. Here’s a look at the much-awaited release with behind-the-scenes footage and event photos (Go to vervemagazine.in for the behind the scenes videos and additional stills and footage and interviews here.) 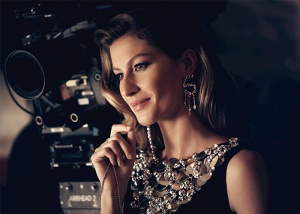 The music is so haunting that I wake up the next morning with the melody of You’re the one that I want by Lo-Fang in my head. A very familiar song is taken and then expectations are disrupted by giving it a completely different feel…that is what art is about, after all. But it doesn’t happen all at once. It creeps over you as you watch it, as you listen to more. And that is the embodiment of the spirit of a woman. She isn’t everything you see all at once, or what you thought you knew about her. She’s all that and more. The woman we all identify with is the person who is equally at ease at home with her kids, chasing after her love and at work, all in all, being a woman of substance.

Chanel’s No. 5 has had a reliably larger-than-life treatment under Baz Luhrmann’s expansive direction; not to miss the fine detailing with hints to the number that has become iconic under the brand as seen in the delicate jewellery, the surf gear, and the mise en scene.

At the Chanel office, over cookies and tea, we watched the story unfold through all the behind-the-scenes videos. Baz brought the making-of alive with his clear grasp on the vision and story. He had previously directed Nicole Kidman as the face of the feminine scent, and now he has evocatively shot Gisele Bündchen in their latest ad film.

In 1920, when Coco Chanel was given numbered glass vials containing sample scent compositions, she picked a number that has always meant a lot to her – number five. The number, with it’s non-fussy classic bottle, has become iconic over the decades made particularly so when Marilyn Monroe was asked in an interview what she wore to bed, she responded with, ‘five drops of Chanel No. 5.’