The CEO and design head of Vu Technologies, Devita Saraf, is a trained Odissi dancer, member of the international high-IQ Mensa society and has been ranked in the top 25 most powerful women in India (2006) by leading national media. Young, smart and talented, there’s no question about Devita Saraf’s place in The Rose Code 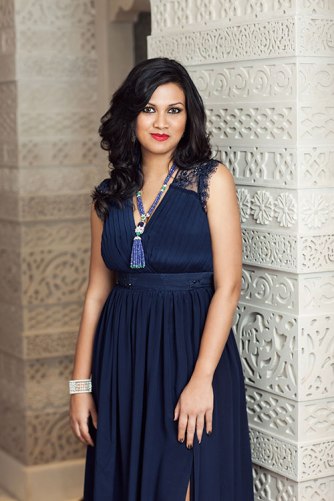 “I believe in thinking ahead. I get very uncomfortable if things seem too unchanged.”

The 32-year-old daughter of Rajkumar Saraf (chairman and CEO of Zenith Computers) started training at the age of 16, and made sure her academic career followed suit. Post management of technology at University of California, Berkeley, business degrees from the University of Southern California and London School of Economics, Devita Saraf joined her family business at 21 becoming the director of marketing. At 24 she started Vu Technologies, and at age 29, co-founded the Pittsburgh-based Vu Telepresence Inc. “While at Zenith Computers, working closely with industry behemoths such as Intel and Microsoft, we realised the burgeoning demand for high-end technology in the emerging Indian market. I mixed my love for luxury with our background of technology and the innovation capabilities of these large companies, and started Vu Technologies.”

She looks at the entire business, “even boring bits such as accounts, logistics and operations”, while her heart remains in marketing. She exemplifies the spirit of entrepreneurship: “It begins with imagining something that doesn’t exist and making it real. Entrepreneurship is a personality trait more than a job. Like the friend in the group who always makes plans, as opposed to the ones that just go along for the ride.”

Success is sweet, as Saraf has discovered. “I was never a topper in school and barely got any certificates for academic excellence, so I guess I compensated to my parents by winning some major business awards. They make my mother proud, and that is always satisfying.” It’s not surprising then that she counts as her personal milestone being invited to her school (Queen Mary School, Mumbai) as a chief guest a few years ago. “The same teachers who punished me for being a mischievous child, were now being hospitable. But they were also very proud of me and moments like these motivate me to work hard.”

While her workday is generally a mix of meetings, emails and face-to-face interactions with team members, she leads a “normal South Mumbai life, taking long walks at Marine Drive or meeting friends at the Willingdon Club. I’m not married yet, so it gives me enough time to pursue my interests such as dance or actively participate in EO and other forums.” Saraf also has certifications in Ikebana and jewellery design. She designed her name in diamonds as a necklace for her 10th birthday and wore it for every birthday thereafter. “Honestly, it surprises me that my parents let me design with diamonds at age nine!”

The global jetsetter’s personal style can be described as “feminine sophisticate” as she favours body-con dresses, red, pink, floral prints, lace, trench coats, hats and jewellery. “Even though I am in business, my style is far from androgynous.” She is inspired by “powerful princesses” and is all about creating new milestones and reaching them. “I do aspire to have political and policy-making leadership in this country. It’s the least we can do for the future of our country.”