It’s a modern city with a romantic soul. Vienna’s majestic royal palaces, quaint coffee houses and famed tradition of outstanding opera music evoke a bygone era of refinement and grandeur. Sitanshi Talati-Parikh walks through the heart of the bustling Austrian capital and succumbs to its elegant charm and deliciously slow rhythm 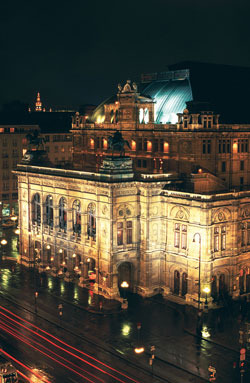 A ring of fortune, history and spectacular beauty drifts in with the sound of music. The tune has been heard a million times before and is unforgettable. The inner circle of Wien, the Ringstrasse, the city centre or first district, holds me spellbound. The flight attendants were not joking when they said, “We are landing in Vienna. Move your watches back a hundred years in time!”

It’s true. Despite its modern fittings and the latest technology, Vienna still maintains its old-world charm. So much so that I half expect one of the locals to raise his hat and bow in greeting. Baroque architecture jostles for space with Art Nouveau in this predominantly Catholic city overflowing with museums, cafes, opera houses, and churches.

As tourists mingle with locals at one of the Kaffeehaus (local coffee houses), I observe the age-old tradition of taking time over the brew, savouring a pastry, smoking a cigarette while reading the papers, gabbing or even composing (let’s not forget the legendary Mozart spent most of his days in cafes). This is one city that knows how to work and how to unwind. It might lack the breathless pace of a New York or London, but Vienna more than holds its own with a charm that is distinctly European.

It’s as if time has stopped – that it has raced through the city centres of the world, found its home in Vienna and is resting here. The thought makes me want to take a breather as well. Breaking my stroll through the Museum Quarter, I lie down on the crisp green grass and watch the world enfold before me.

A contemporary art exhibition at Vienna Secession, the world’s oldest independent art institution devoted to contemporary art, catches my interest. Art here, I realise, resides not only in the paintings, but also in the buildings, the music, the thinking and the pride of the people. This in itself is not without irony as many of these beautiful buildings (especially the Secession and Staatsoper) were genuinely disliked by the people when they were first built! Names roll off a local tour guide’s tongue as she rattles off names of architects, musicians and painters in a single breath. I learn that Otto Wagner, one of the most prominent Viennese architects, is among those one has to be grateful to for some of the splendid structures in the city.

Across from the Museum Quarter, the Hofburg Imperial Palace, which has hosted some of the most powerful people in Austrian history and is the residence of the President of Austria, is also a stop for the famous Fiakas (horse-driven carriages). Again, I’m back in time. For a princely sum of 40 euros, I can take a Fiaka ride around much of the Ringstrasse and relive the grandeur of the past. It is, however, the former summer palace of the Habsburg family, Schönbrunn, with its magnificent gardens, that is considered the ultimate palace experience in Vienna.

Baroque and Gothic, the imposing Stephansdom (St. Stephen’s Cathedral) is located smack in the heart of the city centre and is a beloved favourite. It’s always eventful to walk from the Wiener Staatsoper to Stephansdom through the pedestrian path paved with shops, cafes and performers. Watching the clever, talented performers, I snack on some traditional fast food — a Würstelstand or a sausage shoved into a humungous bread roll. A particularly tasty variation is the Burenwurst and Käsekrainer (sausage filled with cheese). It’s not unusual to find the stands crammed with kebab (Turkish sandwiches) and pizza offerings as well – a new addition to the fast food culture, I’m told.

Sitting in one of the cafés, I’m awestruck by the power of a middle-aged opera singer’s operatic vocals, amused by street performers vying for our attention with their jugglery, tricks and colourless jokes and quietly entertained by a pianist who rolls in her piano into the street to play to an appreciative audience.

The famed music culture of Vienna is outstanding. From street musicians to fabulous operas and ballets, Vienna throbs with exquisite sounds. I choose to attend the modern rendition of The Nutcracker, playing at the magnificent Wiener Staatsoper (Vienna State Opera). It’s a stunning performance, never mind the audience’s claims — overheard between acts over wine, chocolate and caviar – that it did not quite measure up the original.

An elegant local tradition is to enjoy a performance followed by a walk to the Sacher Hotel nearby to savour the original Sachertorte (a dessert composed of several thin layers of dry, slightly bitter chocolate cake with apricot jam in between, served with dollops of sugarless whipped cream) and rub shoulders with the best. Legend goes that the original torte was made by mistake by young apprentice Franz Sacher in 1832. Of course, it’s now world famous and Sacher Hotel’s best kept secret, even involving a long legal battle! Personally, I found the Appelstrudel and other pastries more exciting than the over-hyped Sachertorte. But the Sacher industry thrives as no tourist comes away without experiencing the original.

A great way to end the walk — drinks and dinner at the cosmopolitan DO & CO Stephansplatz with its spectacular view over the cathedral through full-length glass paved walls. I get a taste of refined Vienna as I tuck into the local weiner schnitzel (Viennese breaded veal cutlet, with various accompaniments) and watch bankers and high-profile associates in muted conversation.

I walk slowly back to the sophisticated Le Meridien, conveniently located on the Ring, across from the Staatsoper. As I enter, I witness a happening fashion party – with a showing of LISKA, one of the oldest fashion houses in Vienna. Swinging with some of Austria’s hippest, I take quick notes on the latest trends for Autumn-Winter 2007. A-line dresses, capes, clutch bags (particularly the crocodile leather sort), wide belts, patent leather boots, feathers and fringes are the latest ‘it’ sensations.

I suspect the Viennese temperament — sentimental and nostalgic — is rubbing off on me. In the wee hours of the morning, exhausted, though not world-weary, I stand by the long paned windows, staring out at the now peaceful, tree-lined Opernring Road. I pretend I live in this posh area.
This memorable walk across one of the finest cities in the world makes me want to believe this is home. I really don’t want to leave. Not yet.

Exult in the city’s rich delights

Suburban toast
Suburban Vienna is the place to try new Austrian wines and relax at a local Heurigen. These are the only places authorised to serve new wine, often accompanied by elaborate Viennese specialties or basic bread and cheese platters.

Deconstructed designs
Austrian fashion designer, Helmut Lang, is renowned for his minimalist, deconstructed designs. Originally from Vienna, Lang branched out to international fashion capitals like Paris and New York, with his own label.

Schrammelmusik for the soul
This Viennese folk music, popularised by the Schrammel brothers, Johann and Josef became immensely popular with the elite who were bowled over by the melodious, melancholic sound. A typical ensemble comprises two violins or fiddles, a double-necked contraguitar, a G clarinet and often, a button accordion called Schrammelharmonika. Many of Vienna’s famous composers, like Strauss, Brahms and Schönberg were Schrammelmusik enthusiasts.

Edelweiss blooming
The Edelweiss lives up to its translation of noble and white. Though found in other European nations, Austria’s national flower has shaped the world’s image of the county and the Alps. The Sound of Music’s most beloved song is dedicated to this little, big flower.

Coffee, anyone?
The Viennese are very serious about their coffee, traditionally served with a glass of chilled water. It’s sacrilege to just say you want ‘coffee’ when you’re spoilt for choice with varieties like Kleiner Schwarzer (small black coffee), Großer Brauner (large coffee with cream), Melange (coffee with milk), Kapuziner (small black coffee and a dash of cream) and Kaisermelange (coffee, milk, egg yolk and cognac). In the late 19th and early 20th century, leading writers frequently met and wrote at Viennese cafés, where much great music was also composed.