Stepping away from the modern spa techniques, Sitanshi Talati-Parikh sets off to explore the ancient baths and ritualistic cleansing therapies in two very exclusive Turkish locations – the Kempinksi Hotel at the Mediterranean beachside Bodrum, and the Ritz Carlton in Istanbul 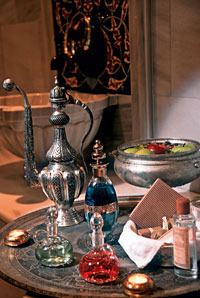 I knew a little bit about Turkish baths – the fact that they have been a source of inspiration especially for the Victorian Era, (think Titanic); and have been a confluence of Roman, Byzantine tradition merged with the influence of the Turks of Anatolia. I decided to keep an open mind in the five-star version of the local baths as I was duly escorted into the impressive facilities of the Six Senses Spa at the Kempinski Bodrum.

Stately and expansive, the rooms spilled into one another, with a spectacular view over the Aegean Sea from the angled glass windows. With a sense of trepidation, I wound the pestemal (a simple woven cotton fabric) around my waist – and clonked over the hammam carpet into the first chamber in the nalin (special wooden shoes embellished with mother-of-pearl). I had been forewarned by the spa director, Lisa, that the hammam could be a little rough – it has been known to leave a jarring sense of loss of skin! Feeling particularly protective towards my own supple skin, I nearly had second thoughts about going through this experience, but faced the first room with the courage of one entering a torture chamber.

Clear white marble from floor to ceiling greeted me, in the vast octagonal room, with an octagonal raised piece of marble directly in the centre. Having sat in the steam room for fifteen minutes prior, I was already feeling misty and breathless. As I lay down on one side of the central piece, I shot up straight when a hot stone nearly scalded my back. Quietly amused, the bikini-clad masseuse, also with a pestemal wrapped around her waist, motioned me to lie back down and relax, as she poured cool water all over me from one of the myriad stone wash basins, with a metal bowl. Alternating warm and cool water, she was opening and closing the pores of my skin, before beginning the lengthy exfoliation.

Wrapping a kese (a rough mitt) around her hand, the masseuse began to vigorously scrub my skin, leaving a brisk, burning sensation. As I frantically motioned her to keep the scrubbing down to a minimum, she smiled enigmatically, leaving me with a sense of a lost cause. Gritting my teeth through the exfoliation, I finally found myself drenched with the soothing water once again. Getting a moment to catch my breath and wince, I could smell a fragrance wafting towards me and saw the masseuse from the corner of my eye swaying and blowing into a big bag. Curiosity piqued, I sat up and craned my neck to take in the surreal scene.

She was filling a large soft bag (specially woven out of hair or plant fibres) with soapy water, blowing into it and shaking it until it began to overflow with soap bubbles which she then emptied all over me! I was lying in a cloudy haze, covered in soap bubbles, as she then slid the soft bubble bag in a light rub all over my body. It was the most wonderful sensation after being roughly scrubbed from head to toe! Drifting away, I caught myself imagining this room filled with laughing, gossiping local women of yore, bathing together and socialising with a strong sense of familiarity that is possible only in a community bath. After all, they gathered here for all cultural occasions – ritual cleansing, wedding ceremonies, a new born baby’s fortieth day, hospitality bathing, circumcision… uh, need I say more?

While the community bathing concept has reached all parts of the world, I believe it is the exquisite engraving and mosaic, carved marble and gold embellishments of the Ottoman Empire that has made Turkish baths really famous. It is easy to feel like royalty, being bathed on marble and gilded patina. Brought pleasantly back to the present, with the advent of a soft massage with silk moisturisers, I realised that though this was a complete pampering experience, a true hamam needs the company of friends or acquaintances to make it an authentic one. I wasn’t complaining though – lying back and getting bathed is generally restricted to when you are a baby!

As the 45-minute bath drew to a close, she helped me up, dried my hair and body, wrapped me up like a little child and took me into the last chamber, filled with lanterns, lounges and muted music – in which you could relax and cool off. Sip a little tea, lie down and even take a nap after the massage or marvel at the baby-like softness of your rejuvenated skin, smelling fragrantly of the traditional attar of rose.

As I arrived in Istanbul, the land of harems and their pampered traditions, I was ready for a deeper experience. Little did I know what was in store, at the ultra-luxurious Laveda Spa at the Ritz Carlton. I found myself getting ready for a 50-minute traditional Turkish massage by one of their most experienced masseuses, Sema. As I lay back scrubbed and dried, I wondered why they have a massage after a bath – apparently, a massage is the best way to relax your body and skin after the exfoliating hammam. Starting with a slender wrist movement, Sema loosened the stiff muscles of my body before she embarked on a stronger kneading and arm roll technique. Like the Indian Ayurvedic massage, the Turkish one also tends to use a generous amount of pressure and ancient therapeutic techniques as it is a invigorating and stimulating massage rather than a relaxing one.

As Sema quietly worked away, I found myself finally getting the knots out of my wound-up body. Suddenly, I found a strange hot sensation run through my back, a growing circular heat and I stirred and asked her what was wrong. With a self-assured demeanour, she explained that noticing some stress-related pain in my back, she had reverted to a bio-energy massage, which was excellent at drawing negative energy out and flowing positive energy into the body, creating the heat waves. This was the first I had ever heard of a bio-energy massage – I asked her to tell me more. Not proficient in English, like most of the people of the country, she tried to communicate her response in broken English. Endowed with highly intuitive fingers and a heightened sense of touch, Sema, apparently could sense the ailments in her clients’ bodies and could also sense blocked chakras and energy fields. I found her telling me things that only my doctor would know and I was bowled over by her insight. And then, she made predictions that only a soothsayer could. From the certain present to the relatively ambiguous future, we were now treading ground that left many questions unanswered – that only time would prove accurate. As the massage drew to a close, I sat up feeling lighter and emotionally moved. It was as if her energy fields had managed to channelise positive fuel into my body….

From ritualistic cleansing to a therapeutic Turkish massage, the experience, even if not exactly in the populated ambience of the bygone era, was by itself truly spectacular. There really wasn’t much else to say, except, maybe, Masha Allah!