Jive in a raucous Mykonos bar, weep at the splendour of a sunset at Santorini and watch a myth come alive in the Mediterranean. Sitanshi Talati-Parikh traverses the legend of the fabulous Grecian islands

A strong gust of air knocks the wind out of me. I battle against it, as if locked into a ground-up quagmire. I have barely descended from a 30-minute Aegean Airlines flight from Athens, and I am already dreading the next week that lies ahead of me in the famous party island of Europe, MYKONOS, that has been known to give Ibiza a run for its money, and a true taste of the celebratory honey. Hugging my jacket closer, I think desperately about all the fabulously skimpy clothes in my suitcase, and wonder if anyone would ever find out if I never left the hotel room, in fear of being blown away into another planet. I’d been forewarned that Mykonos is renowned for its windmills, and now being battered like a rag doll, I truly understand why. A sneak peak at my husband struggling next to me, and I am aghast at his dejected air.

I stare despondently out of the window, at miles of barren countryside, dotted with semi-constructed Cycladic buildings. It looks forlorn, remote and desolate, hardly what one would expect from a happening beach scene. It’s as if we have slipped back into time, when Aristotle Onassis brought Jackie Kennedy to this then-remote island. Winding across the road, I glimpse a flash of Mediterranean blue, looking dark, inky and bleak as the foam swirls in a vicious white, whipped like cream against the battering wind.

The car turns into our hotel, the Mykonos Grand, about four km from Mykonos town and a sense of warmth suddenly envelops me as the serene beauty of white, mosaic, patina and hard-carved marble unfold a promise of better things to come. Greeted by the dashing manager Panayiotis, the epitome of a charming (single) Greek man, I am handed over the keys to my destiny for the next week. Still buffeted by the strong winds as we wince our way to the room, hubby and I brace ourselves for a sombre vacation ahead.

But when I walk into the room, I gasp with pleasure. Pure white marble stretches from one end to another, leading from a private steam and Jacuzzi room, onto the stone patio where our personal infinity pool stretches our imagination into the depths of the Mediterranean waters. As I sip on the local masticha liqueur staring at the beach Ayios Yiannis, where the movie Shirley Valentine was filmed, I shrug, thinking – if all else fails, this wouldn’t exactly be the worst place to celebrate our anniversary….

Flash-forward a mere day later and we are basking in the hot sun, swaying to European beats on the fabulous sandy beaches of Mykonos (from smaller ones like Ornos and Psarou, to the bigger ones like Platys Gialos, Paraga, Paradise and Super Paradise), keeping our eyes peeled for the many international and Greek celebrities that have summer residences on this sophisticated and upscale island.

True to their word, the local weather predictors were bang on mark and there is no sign of the unpredictable ‘meltemi’ that sent us into the depths of misery, which cancelled many a ferry and has been responsible for many a skirmish fought on the famous Aegean Sea. In Greek mythology, Mykonos was the location of the battle between Zeus and the Gigantes and the island was named in honour of Apollo’s grandson Mykons.

Chora (Mykonos town), set around a picturesque fishing bay, holds its own with a cosmopolitan character that is surprising in its quaint environs, where tourists jostle into fabulous little boutiques and designer stores. It is preferable to stay in a deluxe resort on the outskirts (with convenient access by bus or car) rather than in town, where a sea of small whitewashed rounded buildings nudge each other on a haphazard labyrinth of cobbled winding roads originally intended to confuse pirates.

The town bewilders the layman and would undoubtedly leave you clutching a map and still walking in circles, trying to stick to Matogianni Street (the main shopping path). It is not surprising to find a local lounging against his shop, smoking and watching you with snickering amusement, as many a tourist has fallen prey to the deceptive streets, more often than not tumbling over Petros, the local Pelican – a Mykonian mascot for half a century. Despite that it’s hard to miss probably the most photographed church in Greece, Panagia Paraportiani – a group of chapels merged into what was once described as an ‘organic masterpiece of accidental architecture’ – standing on a once-fortified piece of land.

Paradise Beach, ranked as one of the top 10 beach party destinations of the world, lives up to its name and reputation, resonating with music that would make your pants fall off and an environment that would probably make you want to do just that! With world-famous deejays making their rounds in Mykonos in the summer (July-August), non-stop parties that race into days and pour into the ocean, with a flood of people from every part of the world picking their slice of pleasure, Mykonos rocks it up, shakes it around and splashes it down until you are left buzzing with wonderment. Designated beaches like Super Paradise encourage the gay population to come out of the closet and escape into the ‘open’ sunshine without reproach. I covertly watch two nude European women, lovingly rubbing suntan oil onto each other, as I snuggle closer to my husband.

If huge crowds and racy partying is not your cup of holistic pleasure, June or September is the perfect month for unadulterated relaxation on this seasonal haven. It is then easy to find a tranquil spot on the Chora waterfront, watching the ferries dotting the clear skyline, over platters of fresh seafood at a local café. Come evening, we find a spot in Little Venice, constructed right onto the sea’s edge with precipitous balconies peering onto foam washed pebbles, where one wrong stiletto step or an awkward bump would send one reeling into the turquoise waters. Throbbing with bars (Caprice and Mykonos Bar are to die for) and fine dining restaurants overlooking the famous quartet of Mykonian windmills it is possible to romance the night away in this Grecian Venice.

Later, as I lie back in one of the sunniest areas of the world at the Althea Spa of our hotel facing the sacred island of Delos and relaxing with a traditional Greek olive oil massage, I am told this very spot attracts the highest concentration of cosmic energy. The cosmos has definitely worked overtime to ensure that true bliss touches my fingertips and sends a flood of pleasure into my life, even if for a mere week.

Perched on the edge of a cliff, overlooking fragments of a dormant volcano afloat in the Mediterranean waters, probably the only one in the world with its caldera in the sea, the sun performs its daily ritual. This is the famous SANTORINI sunset – which people fly out miles to watch, for which people spend a king’s ransom to get married against, in front of which writers in desperate need of inspiration stumble around. Santorini is what poetry, dreams, flights of fantasy and destination weddings are made of. As the sun’s rays sensually explore the riot of volcanic colours, naturally changing hues through the day, surrounded by the deep, blue sea, the sight brings a flood of lyrics to the tip of one’s tongue, a calm sensibility and yet an eager uneasiness to capture this eternal moment, at a place where civilisation has existed since the third millennium, BC.

From the heart of a natural catastrophe – volcanic eruptions that destroyed the island many times – has emerged spectacular beauty and tourist exploitation. As visitors throng onto the harbour in hordes, I let the pace slow me down, let the feel of the island’s majestic appeal sink into me. The cliff rises steeply into the sky and if you are one of the lucky few to have taken the high-speed catamaran ferry or a flight, then you can take the road up to the top of the cliff, where most of the towns with spectacular views are located. The others that arrive via bigger cruise ships have three remarkable options ahead of them: walk (only recommended if you are intensely fit or a masochist), ride abreast a donkey (bumpy, to say the least), or take a cable car (wait in long lines if it’s peak tourist season).

Arriving in a record 10 minutes by car into the capital town, Fira, I watch amazed as the panorama unfolds before me. In desperately steep winding, cobbled paths, that doth not inebriation or an erring footstep forgive, lies the town – twinkling, as if quietly amused by the next batch of tourists that has arrived, to match wits with its killer (and I mean that with every kind of pun intended) location. The town is built vertically up or horizontally down, whichever way you prefer to look at it. Every hotel and every room lies one below the other, accessed only by the sheer pedestrian path. With horror and growing dread, I realise the implications vis-à-vis luggage and a bout of daily extreme exercise! Fear Factor material, I believe.

Porto Fira Suites, a charming hotel located amidst a cluster of Byzantine and post-Byzantine, Cycladic architecture, welcomes us warmly with slightly raised eyebrows at our immense bags (no, it is not an Indian thing, and it definitely wasn’t too many pairs of shoes)! Having exchanged notes with other tourists on the ferry, I understand that many have chosen to stay out of the main town, in places like Imerovigli (the ‘balcony of Santorini’), Firostefani and Oia, or on the outskirts of Fira in bigger hotels, like The Majestic. Some, like us, have decided to pay the price (literally, for a room with a view is exorbitantly expensive) of being bang in the midst of all the action, where shopping, food and nightlife is but a precipitous walk away.

Strolling around Fira, we stumble upon a gold mine – literally. The path is known as ‘Gold Street’, peppered as it is with shops selling every kind of gold jewellery and antiquity. As I steer past the glitter I swerve into the bylanes of the buzzing Erithrou Stanrou street, which I chose to nickname ‘Party Street’. From an Absinthe Bar called Casablanca Soul to nightclubs like Enigma, that don’t even begin to open an eyelid before 1 am and start rocking the daylights off the volcano in the wee hours of the morning, I discover with incredulity that Fira has its share of a big party scene. 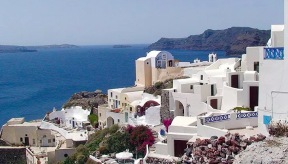 We choose to drive around in a racy convertible with the top down, stopping by for a bout of local wine tasting thrown in for good measure. Santorini, depicted as the island of volcanic mystery and sheer cliffs, gently merges into the water on the other side, with exceptionally colourful beaches. Kamari, on the southeastern side of the island is the most international place to lounge upon. I realise, that walking barefoot on the hot volcanic sands can be a tad scalding, so it is advisable to keep those flip-flops on! There is no better place to get a killer tan than on these beaches that simply soak up the sun.

While both of us wait for the sun to set in Oia, on the other side of the island, renowned for the world’s most beautiful sunset over the caldera, the hours simply fly by, as the sun’s rays flecked with the dark hues of the deepening volcanic earth, move slowly down our bodies and into the depths of the water, leaving behind a sense of peace, fulfillment and accomplishment. This is one sunset that is difficult to walk away from….