Fantasy Mode – Saawariya
Anuradha Vakil for Sonam Kapoor
In the romantic, lyrical tale described over four fateful nights, the screen comes alive with intricate attention to detail in the ambience of Saawariya. Fantasy woven into the fabric of traditional designs enhances Sakina’s (Sonam Kapoor) mystical quality, as she flits in between the surrealistic frames. Designing with the outlook of ‘poetry in motion,’ Anuradha Vakil, known for her work in fashion design that is deeply rooted in Indian crafts, completes director Sanjay Leela Bhansali’s vision. Understated designs, which shadow the intricate background sets, are actually realistic and wearable. Empire waistlines and floating anarkalis in classic colours (primarily black and white) have become the rage. Drawing from kathak and the Islamic arts and culture, there is a predominance of antique fabrics, appliqué and ikat weaves and kalabottan embroidery. Vakil shed her initial skepticism at designing for a commercial film, when she discovered the artistic vision of the film.

Authentic Recreation – Khoya Khoya Chand
Niharika Khan for Soha Ali Khan
In a film that takes the audience back to the 1950s, to the era of black and white cinema, Khoya Khoya Chand, a story of on-set romance, subtly plays with the mood of the time. Niharika Khan (along with Ashima Belapurkar) tracked back to film magazines, old movies, footage, and survivors from that decade, meticulously developing the evolution of the 50s’ silks and baggy pants to the chiffons and drainpipes of the 60s; indemnifying the teased hairdos, and svelte sari-draped divas. Khan tapped into real life sources, like those of her mother-in-law, Begum Para, her mother’s friend, Waheeda Rehman, and ’60s glamour doll, Saira Banu, making diligent use of valuable resources like old pictures (especially those of Madhubala) and her mother’s saris. It is not surprising then, that the styling is reminiscent of divas from that era – Nadira, Nargis and Meena Kumari. The movement in time is also symbolised by the colour palette: the earlier half of the film restricts itself to muted hues and black and white, while the latter half erupts with a burst of colour, as the cinema transitions to Technicolour.

Ethnic Fusion – Jab We Met
Manish Malhotra for Kareena Kapoor
As the small-town girl, with spirit and a refreshingly optimistic outlook on life, completely unaware of street corner whispers and conventional norms, Kareena Kapoor carried off this eccentric look with aplomb in Jab We Met. Manish Malhotra, exercising the artistic freedom given to him by the director, Imitiaz Ali, boldly dressed Kareena in patiala pants in a fusion concept with a mismatched T-shirt and traditional hoop earrings, which have gone on to become a cult statement. As he describes it, “The blue singlet was peeking through her shirt, and her character, Geet, is someone who would shed the shirt and jeans for a patiala and ganjee – the transition is easy, not requiring any deviation.” The outfit was designed keeping Kareena in mind – her slim figure, height and darkened hair complemented the ensemble. In the latter half of the film, when the character is in Shimla, though Kareena would have preferred dresses, both the director and designer were in agreement that a simple salwar-kameez would work best, staying true to her small-town roots.
And work well it did…. 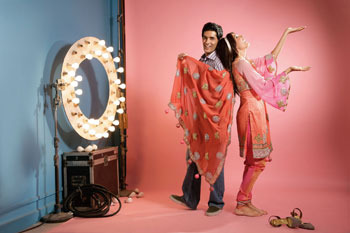 Retro Rendering – Om Shanti Om
Manish Malhotra for Deepika Padukone
Celebrating the ’70s in multicoloured tones, bling and outlandish evocations, Manish Malhotra had fun going vintage with bright colours, skintight churidar-kurtas and bouffant or long straight hair to boot. Being brought up on an intense dose of ’70s films, Malhotra got the opportunity to recreate this vision in Om Shanti Om. Farah Khan, who shares his passion for the era, didn’t think twice before selecting him as the costume designer. Khan wanted to be exact, and even modelled the looks on actresses like Hema Malini, Rekha, Mumtaz, Leena Chandavarkar and Helen, before opting for the final designs. Malhotra loved dressing up Deepika Padukone, whom he describes as, “a beautiful young actress, with a great figure. We could mould her into the look we wanted.” He is thrilled to have recreated history, particularly in the multi-starrer song, which was an exciting challenge in itself. The retro style is now so popular that a commercial line celebrating this look is soon to be launched!