As the young flood Mumbai post international living, education and exposure, Sitanshi Talati-Parikh finds that the city is quickly adapting to their exacting demands and needs, giving rise to a dynamic, fast, racy and global trend. The bagels are lathered with cream cheese, the burgers are juicy and there is authentic dim sum and then some. Warmth and attentive service are their mantra. The choicest of downtown Mumbai’s happening youth-run establishments open their doors to share their unique experiences and tantalising recipes

Walking into the Asian bistro you feel enveloped by a sense of serenity. Dim lighting, tall ceilings and Buddhas galore make this little restaurant and bar appear spacious and inviting. In 2005, post a degree in hotel management from Griffith University, Australia, the young Tham brothers, who are suave and affable in their part, brought to Mumbai the trendy upmarket concept, which at the time was relatively new in the area. Post their successful partnership in Olive, and seeing that no other Asian resto-bar existed at the time, they decided to create a place where people would like to come to celebrate special occasions, while also finding it equally comfortable kicking back with a fresh juice martini in the evening. The new-age food and promising seafood has taken the third generation family establishment a step further, wooing the hip young ones and couples. With an ambitious future expansion plan in mind, Ryan (26) and Keenan (24) felt confident enough to create a brand with their father, Henry’s name, riding on the goodwill and knowledge that he has built over the years. The bar reflects the brothers’ personality and is known for funky cocktails pulsating to the sounds of house, jazz and blues. 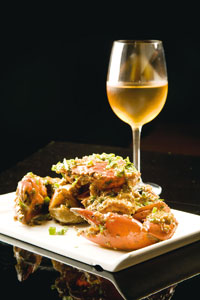 Mandarin Crab
Ingredients: Medium-size live crab, 1 no, 800 gms; Chopped ginger, 2 tbsp; Chopped garlic, 3 tbsp; Chopped onion, 1 no; Chopped green chilli, half tbsp; Chopped spring onion (green stem), 3 nos; Dark soya sauce, 1 tbsp; Light soya sauce, 1 tbsp; Chopped coriander, 1 tbsp; White pepper, half tsp; Salt, pinch; Sugar, 1 tsp; Chicken stock soup, 200 ml; Cornflour mixed in 60 ml water, 1 tbsp; Groundnut oil for the sauce, 3 tbsp; Cooking oil (for deep frying the crab), 400ml.
Method: Freeze the live crab for two hours till it is asleep and in a coma. Rip off the top shell and clean the crab of its grey gills. Chop the crab into six pieces. Pour 400 ml of cooking oil in a wok and deep-fry the crab for about 3 minutes till it is red in colour. Remove crab from oil. In a fresh wok pour three table spoons of oil and add the ginger, garlic, onion, chilli and stir-fry on medium flame till garlic is golden brown. Add light and dark soya sauce and some white pepper, sugar and salt to taste. Add the stock soup. Increase the flame to high. When it comes to a boil, add the crab and toss for four minutes. Add the cornflour mix to thicken the sauce. Add spring onions. Sprinkle the coriander on top and the crab is ready to be served.

Café culture has really found a place in the echelons of Mumbai city. While chains and independent coffee shops have worked, you would be rue to find a gourmet café that is not overpriced in the Nariman Point area. Originally started as a lounge and bar, Dragonfly has now recreated itself into a spacious café and brunch spot through the day, wooing partygoers on weekend nights. Aashiyana Shroff, 26, who moved to Mumbai from London four years ago, teemed up with her father Deepak Shroff and turned her passion for food into their first venture Vong Wong – a Chinese and Thai cuisine restaurant. Dragonfly, located in the same space, though accessible from a different entrance, rivals the former with voluminous space overlooking the ocean. Aashiyana’s reinvented Dragonfly opened its doors last month, with “value for money; good, comfort food” like pizza, pasta, salad and burgers. Not wanting to take themselves too seriously, the place now has a more approachable and less pretentious feel. Also introducing a patisserie called Tart with a cupcake speciality, this is an avatar worth checking out. 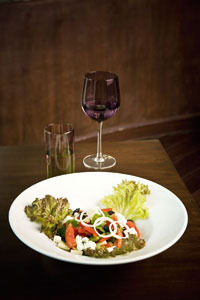 Thirty-year-old Rishi Acharya has found himself splat in the middle of the hospitality industry despite being from a completely different educational background. While his family business has been distribution and retail of alcohol, he did his Bachelor’s of Commerce from H.R. College, Mumbai. He got involved with Athena, after which his ventures (along with his partners) Lush and Ra (named after his initials) became hugely successful. After an unsuccessful stint in food retail, Rishi decided to join hands with Raja Dhody to start OBA, a New York-style resto-lounge, which encourages an evolving party experience with lighting and ambience that transforms according to the hour and concept – from bright dinner and ambient lounge to a glowing red ceiling light for the night. Rishi speaks from experience when he says that opening a large upmarket space and then changing the clientele demographics from exclusive guest-list only to all and sundry, is not what he has in mind for OBA. He is firm about wanting a sophisticated crowd (ideal age group 28 and up) in his 2300 square foot place, without it getting too crowded. He anticipates a select society, where you come confident with the knowledge of bumping into friends. 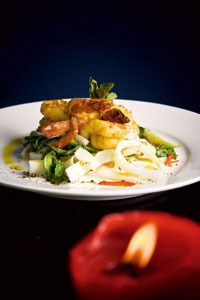 Twenty-six-year-old Abedin Sham, returned from Cornell University, USA with a specific idea in mind. An all-day eatery that catered not only to the myriad tourists walking down Colaba Causeway, but also to the people who have spent time abroad and crave the basic café food that is so easily available in the West. With an affordable price tag and imported items that appeal to a younger age group, Abedin conceived a kitchen that put together freshly baked multigrain breads, curly fries and imported cheeses. Known for their soup-in-a-bowl, gourmet sandwiches, bagels and salads, Wich Latte appears to be modelled closely on America’s café chain, Panera Bread. With plans to create express outlets with a centralised kitchen using economies of scale and the franchise model, Abedin is ready to take up the challenges post the success of his first venture. 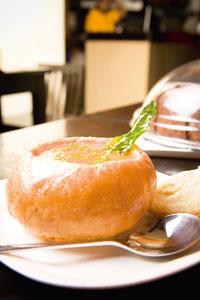 Twenty-six-year-old executive, Aditya Parikh, decided to set up a ‘Thursday Drinkathon’ with a few friends, where young people get together post-work at a common location (generally in the Mumbai downtown area) to grab a few cold ones. It is networking, unwinding and partying all rolled into one. A peek into two of the many London-esque pubs that have sprouted in Colaba

Three young boys, Sumitraj Gambhir (27), Pankil Shah (27) and Abhishek Honawar (25), partners of a company called Neighbourhood Hospitality Management Services, decided to innovate with Woodside Inn, December 2007. They saw potential in the place nestled within a 120-year-old heritage building that has evolved many times, but has been largely successful on this particular instance. The concept is a warm neighbourhood bistro, reminiscent of the London pubs, where one can easily kick back, post work and catch up with colleagues or friends. Images of Mumbai line the walls, where wood, food and beer find a happy marriage in what they call an “urban experiment”. Frequented by artists during the day and professionals in the evening, the place has recall value for its character.

Thirty-year-old Sushant Kamath, with a wide range of experience in the hospitality industry in Mumbai, Pune and Goa and 32-year-old Kumar Patel, with experience in healthcare in New York, opened the doors of Bootleggers in April 2008 to create a “non-territorial, non-class conscious place” to hang out. It is an “attitude-free space” that is full of interactive games, such as chess and scrabble, with pub quizzes once a month testing the general knowledge of the guests. It is frequented by groups of women who feel comfortable in the space, besides that fact that Tuesdays offer them cosmopolitans on the house. Very receptive to feedback, they have recently expanded their food menu, insisting that the take-away is “warmth”.