Two Australians set off on a bike ride through Rajasthan clicking photographs along the way, which were later auctioned for charity. Verve brings an exclusive showcase of four of the shots taken by veteran director Baz Luhrmann and People’s Choice Award-winning artist Vincent Fantauzzo 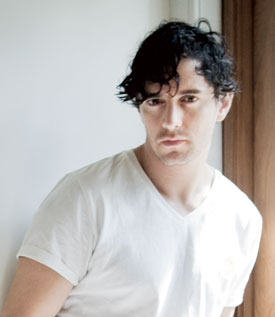 He’s the hot young artist with a wife of Indian (think Goa) origin and a three-month-old baby. Preferable medium of choice, oil on canvas – with a cinematic approach. Vincent Fantauzzo likes using photography and film to create a narrative that the viewer can relate to. “It’s all real art. I do a lot of photography, filming, sculptures and abstract painting. I’m completely open to all forms, letting it evolve naturally. Photography and film inspires my painting.” Not surprising then, that he’s in talks with director Baz Luhrmann (also inspired by visual arts) to blur the line between painting and film with animation.

The 33-year-old UK-born-Australian-resident exhibited his works (besides painting a mural with Luhrmann) at the Le Sutra art concept hotel, Mumbai. He’s exhibited in India three years ago, but this journey was a little bit different. Luhrmann and Fantauzzo set off on a bike ride through Rajasthan to take pictures of anything interesting that came their way, the shots then being auctioned for charity – a positive gesture through a creative act.

Going back to his stunning paintings of the late Heath Ledger and the child actor Brandon Walters from Luhrmann’s Australia that earned him the People’s Choice Award, the soft-spoken Fantauzzo says, “I’m interested in a story behind the person. Sometimes that is a space with the person in it – close-up crop section of the person. A picture speaks a thousand words and a face can do the same thing. A single image can tell a whole story leaving room for interpretation, where multiple stories can evolve. It is about not complicating art. I don’t want a person to have to be an academic or an art historian to connect with my work. It’s for everyone.”