Is great art often discarded as kitsch? Can kitsch overtake art or is true art non-submissive to popular culture and commercialisation?

You can’t help reflecting your prejudice – and occasional snobbery – when you attempt to define kitsch. Oscillating wildly from the vulgarity of commercialisation to the sentimentality of cultural icons, most people’s version of kitsch falls somewhere in between. Wikipedia describes it as, ‘a style of mass-produced art or design using cultural icons. The term is generally reserved for unsubstantial or gaudy works, or works that are calculated to have popular appeal’. Kitsch is often looked down upon as melodramatic and sentimental in its artistic expression.

While ‘kitsch’ was a product of the art markets of Munich, used to describe inexpensive, popular and easily marketable pictures and sketches, the criticism for its concepts is due in large part to its imitative character. Austrian writer and Modernist, Hermann Broch, in his essay, Evil in the Value System of Art, argues that kitsch aims to copy the beautiful, not the good. Yet – and possibly due to its imitative nature – kitsch encompasses popular culture, social phenomena, cultural icons and history, becoming an inherent part of art and artistic comment. Can art be removed from kitsch and vice versa? Do we sentimentalise art by reproducing it or are we rendering art into the depths of blackness by commercialising it? 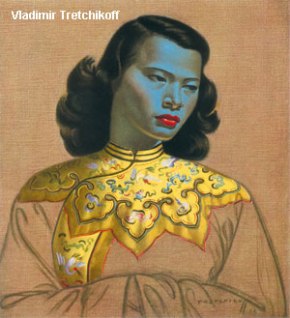 Vladimir Tretchikoff’s iconic painting Chinese Girl recently sold for $1.5 million at a Bonham’s Auction. Chinese Girl is also known as the ‘Mona Lisa of kitsch’, much to the chagrin of the artist. Manchurian-born Tretchikoff escaped from Soviet Russia and emigrated to South Africa after World War II. Along the way he lived in Shanghai, where he worked as an advertising and commercial illustrator in the 1930s. The ‘King of Kitsch’s’ reproduction prints became so popular that it is believed that he was second only to Picasso in popularity. Tretchikoff couldn’t stand being linked to kitsch, though – he considered himself a serious artist. 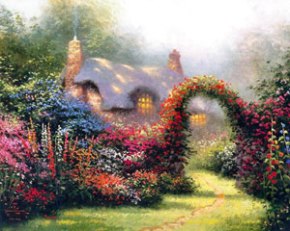 On the other hand, American ‘painter of light’, Thomas Kinkade, made every attempt to gain popularity through mass marketing of his artworks, even setting up a company (The Thomas Kinkade Company) to do so – claiming to be ‘America’s most-collected living artist’ before his death last year. He was proclaimed to be nothing more than commercially successful kitsch’ by the art world, and came under the hammer for gimmicks such as selling his works on the QVC home shopping network. While he considered himself controversial, others proclaimed his works to be ‘chocolate box art’ or ‘mall art’ – due to the fact that his work lacked depth and substance. 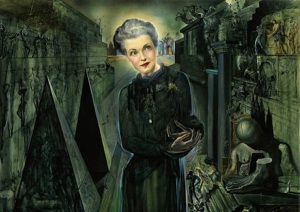 Along with Tretchikoff, Salvador Dali’s portrait of Mona Bismarck made quite a rumble with its Sotheby’s sale this year. Dali’s later work – when he was involved in a ‘paranoiac-critical’ method through self-induced hallucinations – has been criticised as kitsch. In this instance, he painted wealthy and always impeccably-dressed Mona Williams Bismarck in black rags. The irony would in itself make the criticism of this work debatable. 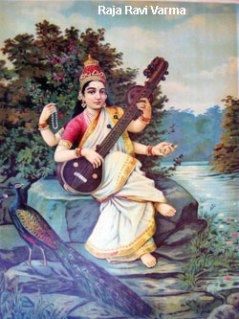 In India, Raja Ravi Varma reproduced his oils of deities from Hindu mythology through the process of oleograph – leading to immense popularity of his detailed, lifelike portraits. While his work was art, the popularity led to mechanically produced kitsch for the first time in the subcontinent – these portraits were later seen digitally reproduced and often stripped off their character on calendars and numerous posters. 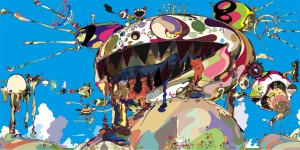 Japanese artist Takashi Murakami’s ‘flat’ works inspired by the Manga and Anime culture are a response to popular appeal. The lack of depth in his works is a strong throwback to contemporary Japanese culture, which he believed to be consumerist and devoid of meaning. In this case, Murakami is using symbols of popular culture to make a comment on popular culture. The self-reflective method is nuanced and thoughtful, distancing it from real kitsch. And yet, Murakami seems embroiled in consumerism, evidenced from the fact that he works with a team (Hiropon factory in Japan and his New York studio) to fabricate his works and his company, Kaikai Kiki & Co. carry out large-scale production of his commercial artworks and merchandise. He has designed a Louis Vuitton logo, and his installation has been seen at the Vuitton store in London. He is a part of the system that he is critiquing – but is he managing to control and execute the critique from his successful vantage point?

American art critic, Clement Greenberg, in his controversial essay Avant Garde and Kitsch (1939), calls the New Yorker magazine ‘high-class kitsch’ and rips the phenomenon to shreds: ‘Kitsch is mechanical and operates by formulae. Kitsch is a vicarious experience and faked sensations. Kitsch changes according to style, but remains always the same.’

Kitsch serves to remind people that a great work of art exists – but it fails to draw from the viewer the real emotion or sensibility that the original work of art can. Its problems lie in the intellectual stimulation – or lack of – that is provided. German literary critic, Walter Benjamin, points out that kitsch ‘offers instantaneous emotional gratification without intellectual effort, without the requirement of distance, without sublimation.’ Its feelings are associated with being self-congratulatory or false, and it fails to raise our experience to a level above the ordinary. In fact, as has often been pointed out, kitsch aims to please – and that in itself alienates it from true art.

And in that very sensibility appears the predilection to dislike kitsch in art. But as you dislike it, can you negate its positive commercial effects? American iconic pop artist Andy Warhol’s ironic art works have now become commercially reproduced in every possible way. Not only do they increase his popularity, but also, in consequence, they increase the value of the original artworks. So in essence, ironic though it may be, commercial kitsch increases the commercial viability of popular art or kitschy art and even that of high art, as Murakami and others have so clearly experienced.

While you may agree with Greenberg in thinking that kitsch is fooling naïve people, but isn’t it also opening the world up to the masses? Would someone in a country far away have known of the existence of the Mona Lisa, had it not been reproduced commercially? Doesn’t it bring the art world into focus and make the world a smaller palette with one mass-produced brush-stroke? (On a side note, a copyist once told an interviewer that his paintings of Leonardo’s Mona Lisa improved on the original by ‘taking a bit of the chill out of her expression’.)

Conversely, the argument runs that kitsch is making people more nationalistic, and therefore closed to world art. The Chinese or Indians may prefer kitschy symbols harking to their own cultural icons. There is sentimentality in kitsch art that has endeared it to generations. But is that really problematic? Do we deride diasporic literature for the same reasons? Young India, in fact, is fondly embracing kitschy art: a product of graphic design and an occasionally-merry-occasionally-gaudy mix of pop culture icons or desi history. From Taj Mahal cushion covers to Bollywood poster totes, from chaiwalla and auto rickshaw coasters to Manish Arora’s clothes and Krsna Mehta’s Ind!a Circus (and previously The Bombay Project), it is all welcome. 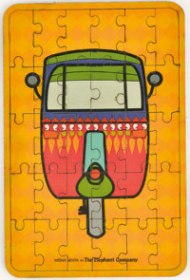 How do we feel about images of dhobi women in saris overlaid with containers of red lipstick as a cushion cover? Does it endear us to the India we grew up in, does it build nationalistic sentiment, does it mock a way of life the intelligentsia may not understand or does it arouse a melodramatic sentimentality for the curios of our city? But Krsna Mehta’s line’s evident popularity (leading him to launch new lines in collaboration with top local design stores) shows that people gravitate to a popular version of rural or local India. His book Mumbai Masti along with Bachi Karkaria, that puts together iconic local images, has been touted a best-seller. While Mehta may not be India’s answer to Warhol, it’s true he has made Bombay’s visuals a part of most households.

It would be simpler to accept that kitsch need not be lauded, but it must not be despised either. A product of industrialisation, it is here to stay, in its many forms, but without the original, a kitschy reproduction cannot exist. It can be a happy marriage. You would be rue to find a home without some form of kitsch that has seeped through the cracks of creative expression. In much the manner that a woman’s bookshelf may have Lolita and Fifty Shades of Grey with equal gumption. Who’s judging?