There is a deep romanticism in Prague, the city that speaks of desire and timelessness….

I see myself living like a troll under the Charles Bridge — or having a conversation one bewitching night with one of the many baroque-style statues that line the bridge. Such is the draw of the city — as if witches that hide in the alleyways have brewed up a mysterious potion with their gnarled hands, the elixir that entices you to want to roam the cobblestone paths searching for truth on the darkened walls. History seems to lurk in those streets, sometimes furtive, often beckoning, suggestive of many moments of love, lust, hope and death. Time stops at the very moment in the past that your imagination sucks out of the grasp of history…as if the pages turn before you in the form of shadowy streets and pebble-stone corners.

One of the only cities in Europe offering the finest examples of every single architectural style, one would imagine this to be a city that would captivate minds seeking to paint dark rich strokes on canvas, extolling the virtues of a land that is like a dark maiden with a tattoo — neither fair nor blemish-free but full of promise. And yet, the nondescript galleries that are scattered all over the touristy parts of town are not plum with creativity. Surly faces, bored tones and a melange of artworks are what a tourist will encounter if seeking without knowledge of where to look. As I sit in the shady, tree-lined square, I see what others may have seen. Time etched on walls, celebrated by seasonal tourists and seasoned salesmen. Local kitsch and pop art history make their presence felt amid curios and street art.

The walls don’t disappoint. Taking to the streets from Prague Castle across the Old Town to Municipal House would unfold almost all the historical styles, including Gothic, baroque, eclectic historicism and art nouveau. Not to forget the quaint Jewish Quarter with well-preserved structures and historical synagogues. And within many of these beautiful buildings, monuments of history, you may find inspiration. 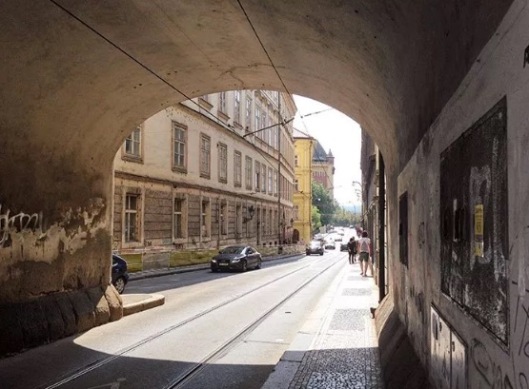 Across a beautiful park, taking the road behind the Mandarin Oriental Hotel, Prague, lies the Kampa Museum. One of the solid examples of artistic exploration where an explosion of thought can break through via a fine slice of contemporary musings available in the form of installations or canvases featuring 20th-century Czech and central European art. (Not to miss a gigantic chair sculpture by Magdalena Jetelová that was once washed away in the floods.) Culture goes pop with the Gallery of Art’s selection of Andy Warhol, Dali’s photographs and Alfons Mucha’s selected art nouveau works. They may be few and far between, but tucked away in the corners of the city seeped in mystery lie hidden gems. Works of art that only a person determined to seek is likely to find.

1. State institutions such as National Gallery offer a selection from Czech art beginning with medieval art up to recent days.

3. Many young artists, graphic designers and young professionals have their studio in Orco, Prague 7 which has become a kind of cultural hot spot. The Chemistry Gallery supporting young artists is also located there. The Hunt Kastner gallery run by two members of Prague’s expat community represents local artists, while also being instrumental in promoting local art abroad.

4. Museum Monatelli (MuMo) is one of only few private museums of fine arts in the Czech Republic and the the museum’s inaugural show in 2009 featured works by 21 international female artists.

5. Princely Collections, Lobkowicz Palace at Prague Castle is likely to become well-known, but for now, the knowledge of it remains with a few. The palace (within the Prague Castle) houses a newly-opened collection of music, art, antiques and arms drawn from centuries-old collections of the Lobkowicz noble family.

6. The Leica Gallery, showcases contemporary photography through the year.

7. Amoya: A not-for-profit project supporting young artists and a platform for Artbanka. The museum’s program takes place in the Baroque palace where visitors can familiarise themselves with the world of contemporary Czech and international art. FUTURA is another not-for-profit centre, with a residency program.

9. The David Cerny Tour: A 3-4 hour tour by a motor vehicle to explore the works of the famous Czech sculptor and controversial artist, curated by Katerina Sedlakova, a freelance tour guide also connected to the Mandarin Oriental, Prague.

10. Summer Shakespeare Festival: Every summer, from June through September, Europe’s oldest and biggest open-air theatrical event dedicated to the works of William Shakespeare has approximately 150 performances, but in the local Czech language.