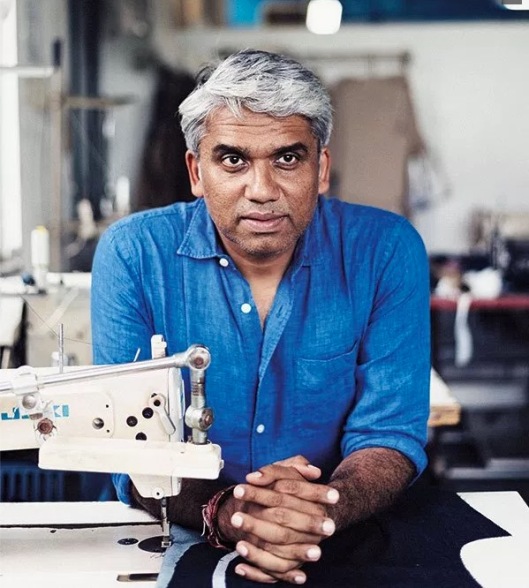 He won’t design a wedding outfit. But, if you are lucky, he will create something, as a ‘super couture project’, for you, if approached with the right sensibility. All he asks is that you be: “intelligent, experimental, unconventional, and not bound by tradition”.

Seminal androgynous fashion has come out of Rajesh Pratap Singh’s atelier. Based in New Delhi, he hails from Rajasthan, and considers the poshakh the perfect bridal garment. Post NIFT Delhi, he worked in fashion in India and Italy before introducing his own line of men’s and women’s clothing in 1997. Pratap Singh, who has showcased his collections at Paris Fashion Week, draws from his roots to craft artisanal garments that stand out for their impeccably clean lines, careful detailing and subtle international silhouettes.

Pratap Singh, who is Woolmark’s first wool ambassador of India (2013), has his creations (made with Bhutanese fabrics) permanently housed in Bhutan’s Royal Textile Museum, while his ajrak prints on linen as well as handloom weaves in ikat are housed in the permanent textile and apparel archives of the Victoria and Albert Museum, London. However, his textile repertoire extends beyond experimenting with ikat weaves, handloom indigos, Chanderis and Benarasi weaves. His fondness for the sari, which he describes as “a directory of Indian textiles”, is evident by the animation in his voice and generosity of adjectives used while on the topic. “It is the purest and most perfect Indian garment: versatile, beautiful and sexy.” He has developed a range of saris; his looms, whenever free, go into creative production to make these.

His voice is crisp, but his demeanour is non-confrontational. He doesn’t want to disrupt, he just wants to be true to his point of view. Perhaps that is what is missing from the Indian bridal milieu — sophisticated, cultivated points of view that offer a bouquet of options to the bride-to-be. Not one that remains limited to what Pratap Singh, at the risk of being politically incorrect, suggests is “a crazy obsession with an idea of ‘Indian royalty’ which manifests itself in a whole different avatar when it comes to wedding attire”.

The designer, who — literally, as we speak — is setting up one of his looms to weave a garment for a close friend’s daughter, has, in the past, designed a classic Benarasi lehnga woven with engineered motifs for his colleague Devika Multani and created a veiled brocade jacket with dhoti pants for Border and Fall’s Malika Verma Kashyap, for their wedding days. Pratap Singh holds strong to the fact that “people should be able to wear whatever they want to, on supposedly one of the most important days in their life. It should be an extension of their personality and whatever they are comfortable with. There must be no expectations, nor should their wardrobe selection be dictated by norms”. Verma Kashyap speaks about her choice of designer for her wedding outfit: “Reaching out to Rajesh was a simple decision, as was the process of creating it with him. I’ve always loved his clothing and the spirit in which he approaches design: it’s thoughtful and cuts through the noise.”

In essence, it boils down to sensibility. And realising that if you like his work, he’ll work with you to create something exclusive. A garment that would be simply the combination of his technique and your personality. Both irrefutably unique.

Excerpts from a conversation with the designer….

Tell us about your problem with Indian women dressed like ‘royalty’ on their wedding day.
There is a confused ‘royal hangover’. What a lot of designers think royalty ought to be, or ‘nouveau royalty’. We already have a traditional wedding outfit (typical to different parts of the country). I believe you shouldn’t touch a garment that is perfect, unless you have something serious to say. I see bad reproductions of some things that existed or that which are thought to have existed: such as a cancan-gown-inspired lehnga. It is neither here nor there.

Do you believe you could create a relevant voice in nontraditional bridal wear?
The categories we work with, so far, have not included bridal wear. Jackets were what we started off with and that is where we progressed. Our job is to solve problems, and we didn’t look at the bridal market as having a problem. There are enough people in this sphere, with some doing a really decent job of it.

What does style mean?
Style is distinctive, definitive and comes from being within your comfort zone, in an effortlessly natural and honest way.

Do you believe that bridal wear, by nature, allows women to be comfortable?
Each to her own. While I don’t want to judge, I can’t understand women wearing something so heavy, where the internal construction has suspenders to carry the weight of the embroidery on the lehnga. I would not make something like that! Weddings in India are a long affair, so wear what you feel comfortable in. If you want to make a statement, make sure it’s one you believe in — the designer is the last person who should be the decision maker.

How would you design a lehnga?
With engineered motifs, and definitely woven. I can’t say that the alternative is a pin-tuck lehnga, which people ask for. The geometry of the pin-tuck lehnga won’t give the right finish to the garment; it’s not meant for that.

Basically, it is the personality of the individual that pushes a garment, rather than me trying to say, ‘I’ve made a lehnga, I’ve put 10,000 crystals on it, it costs you a bomb and you have to wear it.’ It may be great for business, but I am not in that business.

What would it take for a bride to convince you to make an outfit for her?
She just needs to ask. And if she’s interesting and intelligent, why not? If I know the person, I would do it out of love. If a random person throws money at me, I won’t do it.

There has to be a certain vibe and understanding. It’s difficult for me to do a faceless, nameless design of this nature. For that, I have tons of friends doing wonderful work and I’m happy to direct you there!