She’s like a delightful elf, a wisp of fresh air, youthful, light-hearted and effortlessly chic. The face of alternate cinema and an agreeable player in mainstream blockbusters, Kalki Koechlin is malleable and experimental, making her the perfect muse for Verve’s art issue. Verve explores the creative inspirations that define her personality and talent 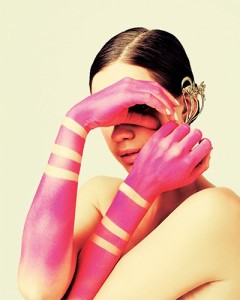 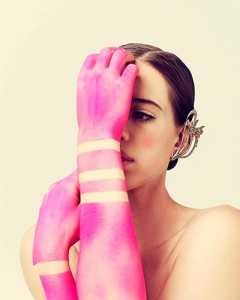 Kalki Koechlin impresses upon you that she’s not conventional by any means. She stood out from her first film, Dev D (2009), where she played the role of Leni, a teenage girl caught in the world of prostitution. Her molten sensuality and her raw performance were stellar, added to which was the subject matter, the fact that she is a “white, blonde-haired chick” and that she is tantalisingly uninhibited. And it’s a different uninhibitedness from say that of a Rakhi Sawant or a Mallika Sherawat; Kalki’s is a classy reserved-ness that naturally doesn’t liken itself to exposure. She isn’t crass or over the top – she merely has different boundaries. These are the boundaries that an artist explores, that one probes unreservedly at societal limitations. “I am not consciously trying to be different; the fact is, that I am different,” she explains, while sitting with her bare feet tucked under her on the sofa. She admits facing an on-going battle with people’s perceptions and consciously attempts to break those limitations.

A QUIRKY BEGINNING
Everything about her has been fairly unusual. Born in Puducherry to French parents, Francoise and Joel Koechlin, who settled into ashram life, she hasn’t been brought up with conventional rules. “They both came here separately, they met in India. They were looking for a life that was different – they taught me to be responsible but to make my own choices. It was never, ‘you have to believe it because we believe it’.”

A CHILDHOOD OF GULLY CRICKET AND PHILOSOPHY
Growing up she read a lot of philosophical literature, including Aurobindo. While most people safely go their entire life without stumbling upon it, Kalki explored Krishnamurti’s Freedom From The Known at the age of 13. “My life changed because of it – you get affected by these things.” She started writing at a very early age – little poems, songs, stories, while running around barefoot, playing gully cricket in a village called Periamudaliachavadi and exploring drama and art along with trekking through jungles while at Hebron School, Ooty. So removed was it from a traditional Indian schooling experience, that she felt comfortable in the knowledge that it was all sufficiently “open-minded and liberal”. Until she had an eye-opening jolt when she went off to study at Goldsmiths in London, where there were “women with T-shirts saying ‘I’m a lesbian’, with pink hair and purple tutus and Goth black boots coming to school. I felt so simple!”

BRINGING THEATRE TO LIFE
Studying drama in London was admittedly the greatest influence on her, carving her as an actor. You understand immediately when she explains that Damien Hirst, and some “out-there art” emerged from Goldsmiths. A smile begins to form, “A lot of which I didn’t like, but which made me think outside the box. It was an opening to these other things that I knew nothing about. An artist takes everything as inspiration, everything that affects your life, the circumstances.”

CREATING CHARACTERS THAT SPEAK
Her all-round drama course exposed her to everything from feminism in theatre to world theatre (including our own Kathakali and Butoh, a Japanese form of theatre); while she picked her favourites from the local greats like Pina Bausch, Peter Brook, Robert Lepage and Robert Wilson. That foundation in theatre becomes ingrained – as a big screen actor, she needs familiarity with the mise-en-scène, which takes place upon reaching the set – even before hair and make-up. A newspaper-stuffed handbag won’t do; what if she needs to throw something at someone, or needs the phone to make a call, while in the throes of the scene? “I need to know what is in my room… what drawers to open! Sometimes I ask the set designer to put some stuff in. The more detailing you give to anything, the more real it becomes.”

BEING A HUMAN CHAMELEON
The personality she brings to a mainstream girl-next-door role, like that of Aditi in last year’s blockbuster, Yeh Jawaani Hai Deewani, is unique. The mannerisms, the bitchy look, the irritatingly suffocating girlfriend may be as far removed from Kalki in real life as possible, but Natasha in Zoya Akhtar’s hit film, Zindagi Na Milegi Dobara(2011) came alive on screen and became one of the most memorable characters from the movie. Kalki can’t help asking questions… making sure the script works, the role works and maybe that’s why the casting works. “I need logic to the character, some idea of how it’s working, even if it is a completely commercial film. You have to make that character believable for yourself. If you don’t believe it, your audience won’t believe it.”

SEARCHING FOR ACCEPTANCE
She has a particularly contrary mix of cinematic choices – dark, edgy plots, horror and easy feel-good romantic films. She takes this mixed bag in her stride; after all, she can watch a Meg Ryan or Julia Roberts’ rom-com, intense European films, or “a mindnumbing Bollywood film like Heroine” with equal ease. “Everybody has multiple tastes, so why should  an actor only stick to one thing? An actor’s job is to be a chameleon, to constantly adapt to different roles. I just want to surprise myself. I chose to be an actor because I love the challenge of changing and transforming. If I get comfortable and stick to that, I would get bored of acting. I can’t keep doing the same role.”

TELLING A PERSONAL STORY
She’s not immune to the fact that an actor only survives because of an audience; an artist can’t find inspiration in isolation. “No matter how much you say you are only doing it for yourself, you want people to relate and understand. I don’t think of doing an independent film so that only my family will watch it, I think, ‘this is a great subject, how come we don’t talk about these things more’. At the end of the day, like everyone, I want to be loved and understood. And that’s the main thing an artist wants.”

The 30-year-old loves popping into MoMA, Tate Modern and the Guggenheim, and finds herself drawn to modern art. “Art is completely tied to the society and the place you are at. It is always relevant to what’s going on. It has to start with something personal otherwise it becomes a social cause. I see art that preaches about change. But until you bring your own personal story to it, it’s not as powerful. The reason you do art is because you feel helpless and you want to change things…but only when it really affects you do you begin to have something to say.” She expresses herself through her writing – even though she isn’t deeply committed to it. She’s written a play, Skeleton Woman, with her friend, Prashant Prakash; co-writtenThat Girl In Yellow Boots with director Anurag Kashyap; has written a new (untitled) play recently and engages in a spot of blogging. “It’s something very sporadic; I feel very focused on my acting. Writing is therapeutic for me.”

It’s difficult to imagine someone so soft-spoken having firm opinions about things; it’s unnatural to imagine Kalki as a movie star. She does and she isn’t. She’s an artiste, an actor, married to the craft, and understands and loves it for what it is. Having participated in various shoots and covers for Verve magazine, including a glamorous Best-Dressed issue last October, you find nothing has changed, no airs have appeared. She’s matured ever so slightly, or is it your imagination that the pixie-like features are just a bit worldlier post her recent estrangement from director-husband Anurag Kashyap? But the childlike innocence, the carefree spirit and the charming personality are all intact. She turns up post a leisurely holiday in Greece, with an enviable figure, abs to die for, dressed unobtrusively in pastel shorts and a shirt. She lounges around photographer Jatin Kampani’s studio, waiting for the shoot to commence, and is completely at ease, with herself and the people around her. She doesn’t mind being captured on candid camera without any make-up or work on her hair, while her contemporaries wouldn’t accept being seen without make-up. She takes photos of the crew on her own nifty camera and is easily amused with the results – promising to email them out. I am not surprised when, true to grain, the email arrives, intact with artistic filters that pick up the mustard yellow from my jumpsuit and spread it in a slow fire around my face. After all, what is art if not living life on your own terms with a little bit of experimentation?

KALKI’S COLLECTION
ON HER WALLS