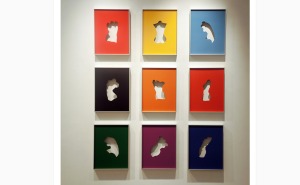 The show: “It is mind, matter, illusion and dream of comprehension of reality that comprise the sensual experience of being alive. The Sanskrit illusion or dream and universe being manifestations of Maya re-captured my imagination in summer 2008 following a severe paralytic stroke. On the way to a painfully slow recovery,Something Else emerged out of the crisis as a welcome respite.”

Specifics: The works are relief pieces of 32 x 41.5 cms, water-jet cut, 1mm-thick stainless steel plates painted with epoxy paints. There are several sets with nine pieces each in vertical as well as horizontal format, titled, numbered and signed by the artist. Configuration of each piece refers to one of the nine emotions with a corresponding hue. The cut-outs reveal sculptural beauty of classical Rasa like,Rati (love), Hasya (mirth), Karuna (sorrow), Rudra (anger), Vira (energy) and Shanta (tranquillity). “Cut-outs of silhouetted torsos create a kind of metaphorical abstraction that deters perception of female form as popular sex objects.”

About the artist: Gujarat-born, UK-educated Dhruva Mistry explores forms in a variety of 2D media like drawing, painting, etching, dry point, digital works, photography, and 3D forms in space. Mistry, who has had over 25 solo shows, numerous international showings and is part of local and international private and public collections, finds inspiration from all civilisations and cultures and resides in Vadodara, Gujarat.

Q&A with Dhruva Mistry (An excerpt)
1. Artistic motivation “Scruples to endure some moments beyond the idea of pain, pleasure and gain arouse curiosity. Consequent feeling of life in the given environment enlivens certain sense of wonder as I shape forms of intent fused with its content.”

2. Creative inspirations “An innate interest in creatures big and small and things dead or alive affect my life. Thought, feeling, reason, environment and society enhance my interests and enlighten my pursuit.”

3. Artists at home “I like Rabindranath Tagore, Ram Kinker Baij, Marcel Duchamp, Van Gogh, Paul Gauguin, Constantin Brancusi, Pablo Picasso, Henry Matisse, Marcel Duchamp, Lucien Freud, Frank Albarch, Louise Bourgeois, and some others including my teachers from Baroda. Apart from areas of interest led by some of my contemporaries, I like commitment of the young and struggling artists whose work advance a new vision as I learn about them.”

4. Concerns that show up in your art… “In the age of moral, political and democratic decay and material greed, to be alive implies being surrounded by irrepressible flames of fear, dread, temptation and glimpses of delight as well as death. I contemplate moments of pleasure, mirth, laughter, peace and bliss that regulate my pulse and movement of the mind seeking peace, harmony and unity.”