My concerns in the 60s remain intact till today.’ Kiran Nadar Museum of Art, Delhi hosts a retrospective of Nalini Malani’s works 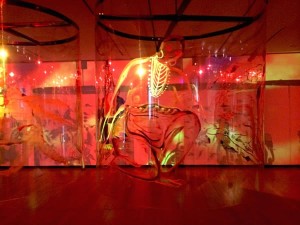 This retrospective brings back Karachi (Undivided India)-born Nalini Malani’s major installations and international projects that have never been shown in India before along with works from the artist’s archives spanning a period of fifty years. The multi-panel painting installation Twice upon a Time (2014), takes up an entire room, while the video/shadow play Transgressions III (2001/2014) combines video projections with rotating reverse-painting, which have in last 15 years become an acknowledged part of Nalini Malani’s oeuvre. Both of these premiere exclusively at the Kiran Nadar Museum of Art (KNMA) in the final act of a three-chapter retrospective, You Can’t Keep Acid in a Paper Bag.

For more than four decades, Nalini Malani has addressed social, political and societal issues surrounding the Indian subcontinent, including the conflict between India and Pakistan, the abuse and rape of women, and the struggle for democracy. Starting out as a painter, Malani – who was recently awarded St. Moritz Art Masters Lifetime Achievement Award created by Cartier (2014) – was one of the early Indian artists to dabble in installations, theatre, erasure performances and video/shadow plays, leading to a spot in premium collections such as MoMA (New York) and the Centre Pompidou (Paris).