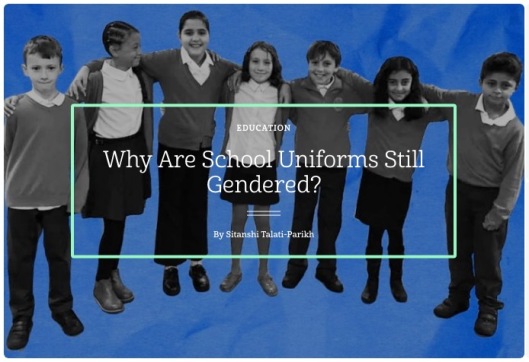 Recently, the Children’s Academy — which runs three private schools in Mumbai — determined through a student poll that its new uniforms will be gender neutral. While an overwhelming majority of students chose T-shirts, 58% of the 1100 girls who participated opted for trousers over skirts, citing comfort as a big factor. The new uniforms will be implemented at Children’s Academy schools in the upcoming academic year.

This decision towards gender neutrality comes as one of many, as schools across the globe adapt to increasingly inclusive attitudes. Last September, The Daily Mail reported that 150 schools in the UK would be introducing gender-neutral uniforms, where children of any gender were allowed to wear either a skirt or trousers. Last month, Fiordland College in Te Anau, New Zealand agreed to gender-neutral uniforms, where the girls will be allowed to wear pants and the boys will be allowed to wear dresses, as per their choice.

Such changes are the result of a growing resistance to gender stereotypes from both students and parents. At a basic level, schools are paying attention to the need to provide young children with the comfort of moving around safely, and without restriction. Although widespread gender neutral uniforms are a step in the right direction, ultimately, India needs to move towards the global trend of letting students choose whether they want to wear skirts, dresses, or trousers.

“As a girl in Indian society, I have grown up in an environment that has often restricted my clothing choices in terms of ‘what to wear’ or ‘when to wear,’” says 17-year-old Tamanna Sheth, who attends BD Somani International School (BDSIS). “I strongly believe in gender-neutral uniforms as I support the idea of comfort over appearance. Besides, they may also make one feel more confident.”

While urban Indian parents may be less resistant to change these days, radically different points of view exist among them. For many parents, gender-neutral uniforms are not on their radar. If they are, they may weigh in but not be a deal breaker when parents are picking a school.

Esha Pandya Choksi, mother of a two-year-old girl, strongly believes that differentiating between clothing from an early age adds to the pool of social factors that foster gender inequality. “At an age when children form ideas, clothing sets the stage about what girls and boys can or cannot do,” she says. “While clothing is not a direct counter to society’s stereotypes, it is a small step towards making a statement.”

Akanksha Shah, mother of two girls, aged seven and four, the older of whom attends Mumbai’s Cathedral and John Connon School, prefers dress to be an obvious differentiator. “They (skirts) are feminine and graceful; they complement the body structure of girls better,” she says.

Mumbai-based fashion designer and mother of a girl and a boy aged five and seven respectively, Anjali Patel-Mehta, is strongly in favour of gender-neutral uniforms. She suggests that a traditional Indian form of dress may actually make for a progressive uniform. “The kurta is universal, entirely gender neutral and authentic to India, while tunic and pants still lean towards a gender,” she says. However, she’s cautious of the implementation challenges — for example, resistance from the girls themselves, like those who struggle with body issues. She believes letting kids choose what to wear for themselves might be the best solution. “Going androgynous or unisex isn’t ideal: eventually, it should be a social choice, rather than attempting to force fit someone into a gender-neutral role,” says Patel-Mehta.

While giving children a choice in what to wear might have its own challenges — a child making a non-traditional choice may face peer pressure and ridicule — it will create a foundation for long-term societal acceptance.

The Mumbai-based Waldorf schools like Tridha, Inodai and The Golden Spiral, with the Rudolf Steiner education system, offer simple colourful cotton kurta tops paired with bottoms of their choice. “Our uniforms are practical and frugal — designed more to be comfortable in our climatic conditions and allowing freedom of movement during play,” says Tasneem Quettawala, co-founder and pre-primary coordinator of The Golden Spiral School.

South Mumbai-based IB schools like Bombay International School (BIS) and BDSIS have gender-neutral uniforms, save for their formal uniforms — worn once a week at BIS and worn optionally at BDSIS. These are in the form of a “skort” for girls, which is a pair of shorts with a front flap, giving the impression of a skirt. Anjali Karpe, deputy head of BIS, says the gender-neutral sports (PE) uniform, which comprises shorts and a tee for all children, is worn on most days and has been around for 25 years, even when it wasn’t the norm for all schools. “It is high time we went for gender-neutral uniforms — there is a distinct change in the perception of what is considered ‘feminine,’” Karpe says. “It is an archaic notion of dressing girls in skirts.”

And yet, while BIS derives comfort from the neutrality of their most commonly worn PE uniforms, Karpe reflects on the challenges of making a school-wide change, as the uniform is an important part of a school’s branding. “It needs to be an informed choice at a student-body level,” says Karpe. “Personal opinion cannot drive school leadership, and it would involve multiple stakeholders.”

The Children’s Academy method of polling its students is a good example of how to drive such change in a fair and egalitarian manner. Their schools will make the new uniforms optional within the first year of the change, taking into consideration parents who have already invested in the old uniforms; the new uniforms will become mandatory from the subsequent academic year.

At schools with less progressive ethoses, the student body may not lean towards gender-neutral uniforms with the same kind of majority. Government schools in India, however, have shown that they’re not resistant to change if it benefits their students. Last year, the Uttar Pradesh government announced that it would be changing the color of its public school uniforms from khaki to bright red and brown, in an effort to ensure that students wouldn’t feel like they were in any way inferior to their counterparts in private institutions. It’s not inconceivable that, down the line, they, too, will feel the need to adopt gender-neutral uniforms, if more private schools begin to do so, and seeing that the gender-neutral kurta already exists as a part of the social fabric.

Schools have been clinging to their uniforms for decades at a stretch, in the name of tradition and school identity. Uniforms have often been designed before the current management can recall, and have not come under review or updated since. They’re unlikely to be high on the list of priorities for most schools. But some schools have begun to lay the groundwork by listening closely to their students. It will be a slow process — stumbling blocks include tradition, deep conditioning, and stigma — but as institutions begin to pay more attention to what is best for their students, positive change will follow.